MUSIC: Fleet Foxes are back (minus Father John Misty) and they're coming to Spokane. 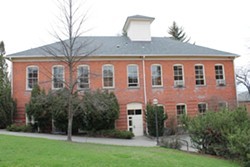 Courtesy of CCS
SFCC classes will move to this WSU building.
Community College will move onto  Washington State University's campus next week, leaving its space at the Gladish Community Center in order to save on rent.

It's time for a divorce
Just as couples who divorce have to figure out who gets what, and how much money they each walk away with, the United Kingdom and European Union have started a two-year break-up process, and money could be a central part of the fight, the Associated Press reports. (AP)

An object in motion stays in motion
While President Donald Trump signed an executive order that could shelve the Clean Power Plan put in place under former President Barack Obama, Washington state is likely to move forward in meeting or exceeding the goals put forth under that plan. (Seattle Times)

Helping those who refuse help
Los Angeles social workers are trying to figure out how to help people with severe mental illness get off the streets and into treatment, but there are strict rules for involuntary treatment, and sometimes people claim they've got a place to stay or someone coming to help them, even when they don't. (Los Angeles Times)

Uber organization
Union leaders are trying to organize Uber drivers in Seattle, but court cases could soon decide whether independent contractors are even allowed to unionize under federal law, The Seattle Times reports. (Seattle Times)

Seattle's Fleet Foxes have reunited, and they're coming to Spokane