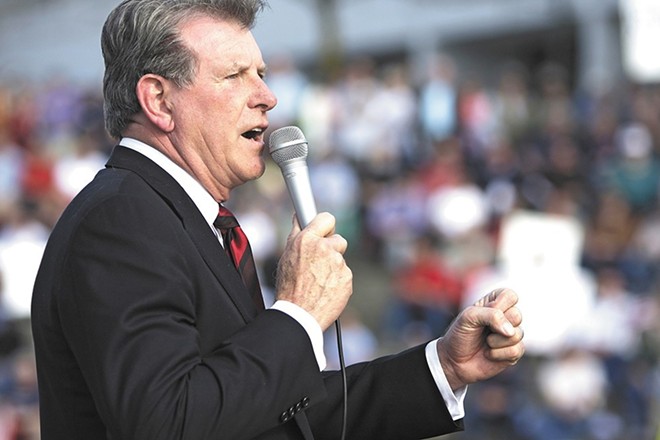 Butch Otter's veto pen continues to rankle groups like the Idaho Freedom Foundation and the libertarian magazine Reason.
A very long time ago, Idaho Gov. Butch Otter ran as a libertarian conservative. But these days, a lot of libertarian-leaning conservatives view him with something closer to contempt.

"He had a real opportunity to demonstrate that he is on the side of liberty," says Wayne Hoffman, director of the Idaho Freedom Foundation. "He failed miserably."

The most recent outrage: Otter's vetoes of a cosmetology licensure bill and a civil forfeiture bill. Both are key issues for libertarians, who argue that requiring licenses for jobs like "barber" or "makeup artist" end up punishing entrepreneurs and newcomers, in order to artificially shield established businesses from would-be competition.

Meanwhile, when they look at civil forfeiture — where police can seize cash and other personal property without a conviction if they suspect it may be connected to crimes — they see serious due-process violations.

"Idaho Governor Flips Off Libertarians With Both Hands, Vetoes Asset Forfeiture AND Licensing Reforms," reads a headline at the libertarian Reason magazine. The subhead reads: "Is he trying to make libertarians angry, or is he just a puppet of special interests?"

North Idaho Rep. Vito Barbieri is not exactly a libertarian. (Here he is expounding on Islam a couple of years ago, for example.) But a recent Facebook post showed just how little respect some conservatives have for the Republican governor.

"Governor Otter hasn't a Republican bone in his body, acting more like a public school teacher bent on growing the Administrative State over public interests, than a Statesman with character, guts, and vision," Barbieri writes. "[Republicans in Name Only] like Otter put State needs first, Administrative bureaucrats second, and taxpayers last. It's too bad we have to wait two more years to put this self-proclaimed libertarian cowboy out to pasture."

Compared to some attempted civil forfeiture reforms, like those that require a guilty verdict before any property is taken, the Idaho bill was modest. It would require more evidence that property had been associated with a crime than simply proximity. And it would require law enforcement agencies to start tracking how much civil forfeiture money is being collected, and what it's being spent on.

"We ask law enforcement to explain how they utilize civil asset forfeiture," Hoffman says. "They don’t have an answer. They can’t really find out."

The bill was popular in the legislature. Nobody in the Idaho Senate voted against it, and only a handful of state representatives, including Coeur d'Alene Reps. Luke Malek and Paul Amador, voted against it in the House.

But in Otter's veto message, he called the bill a solution in search of a problem.

"There have been no allegations that Idaho law enforcement officers are illegally or inappropriately seizing property from alleged drug traffickers," he says in a statement.

The accuracy of that statement depends on the definition of "inappropriate."

An investigation in the Twin Falls Times-News  revealed a case in when Twin Falls County Sheriff’s deputies raided the home of a couple they suspected were selling drugs. They netted a small baggie of marijuana and $12,010 in cash. The couple was never charged with anything, but the sheriff returned only $3,000.

Then there's an anecdote shared by the DKT Liberty Project, which alleges that Idaho State Police pulled over a 35-year-old driver and searched his car when they were alerted by drug-sniffing dogs.

"Although they didn’t find any drugs, they did find $4,200 in cash, which the man had set aside to pay for his divorce lawyer," writes AC Bushnell, program director for the Liberty Project. The state patrol refused to repay the money.

Otter argues that if you're selling drugs, you should be afraid of losing your property.

"It is my view that it is right and proper for drug dealers to have a healthy fear of losing their personal assets if they are caught breaking the law," Otter continues. "But while seeking to ease those fears, this legislation goes even further by placing an annual reporting requirement on law enforcement."

"Who needs accountability from the police?" he writes. "Certainly not Otter, who seems willing to believe anything the law enforcement special interests' lobbyists tell him."

The cosmetology bill, meanwhile, was a little more controversial, but still received broad support. It would have combined the barber and cosmetology boards, reduced the hours required for a license, and exempted some stylists — like wedding makeup artists or people demonstrating hair curlers at malls — from the licensure requirements.

Otter's biggest objection was to an amendment that allowed the board to retroactively reinstate an expired license.

"I will not allow the State of Idaho to be subjected to legal liability for falsely representing the licensure status of those seeking federal student loans for their training," Otter writes in his veto statement.

"That is clear and complete horseshit," Hoffman says. He cites an example of a person who ran a cosmetology college in Twin Falls and ended up losing accreditation because his licensing agreement had lapsed.

"A libertarian governor would say, 'Oh my gosh, we drove him out of business!'" Hoffman says. "What can we do to save this businessman in Twin Falls from having to go under?"

Earlier this year, Hoffman and Reason also took aim at Otter's veto of a bill allowing the use of Cannabidiol oils.

"He's the only governor, Republican or Democrat, to veto CBD oil," Hoffman says. "Tax increases, more bureaucracy, more red tape, more government permission to hold a job. His record as a libertarian or a conservative is just dismal. I’d really like to trade my governor for somebody else. I think a liberal Democrat would be trading up."

As for Barbieri? Here's Vito on the vetoes:

Governor Otter hasn't a Republican bone in his body, acting more like a public school teacher bent on growing the Administrative State over public interests, than a Statesman with character, guts, and vision.

Otter's Veto stamp proves once and for all RINO's have a perfect example from which to emulate their talk of citizen liberty while acting to empower bureaucrats.

Tax food? No problem. It's a steady source of Revenue for the Bureaucratic State.

Two of Otter's recent Veto's have the same ideological base as his Veto seven years ago of the State Nullification effort: They ALL protect the status quo with the effect of limiting legislative power to represent the taxpayers of Idaho.

It's too bad we have to wait two more years to put this self-proclaimed libertarian cowboy out to pasture.