NEWS: What would have happened if City Council President Ben Stuckart ran against David Condon for mayor in 2015? This previously unreported poll gives us some clues.

MUSIC: Elkfest announces this year's lineup, and it's as
click to enlarge 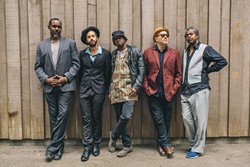 San Francisco R&B collective Afrolicious is a highlight of this year's Elkfest lineup.
eclectic as ever.

Making amends
After a road was illegally plowed through a natural area near High Drive, two city council members called for immediate restoration. Avista is now leading the efforts to restore it. (Spokesman-Review)

Punished for running
An Idaho teenager who went missing after prom on Friday was found safe, according to the Orofino Police Department. Now, he could be criminally charged for running away. (KXLY)

Mall shooter dies in jail
The man accused of killing five people during a mall shooting in western Washington in September was found dead in jail yesterday. The Skagit County Prosecuting Attorney says Arcan Cetin, 20, died of an apparent suicide by hanging himself. (Skagit Valley Herald)

Keeping kids safe
The Coeur d'Alene School District is looking at ways to more effectively check the backgrounds of new hires. This follows a controversy in which a teacher, who lost his chiropractic license for having sex with a patient, was fired. He has since been charged with a sex crime. (Coeur d'Alene Press)

What about your taxes?
As President Trump pushes for tax reform, demands that he release his own taxes may derail any tax overhaul. (New York Times)

Unreported poll previewed a Condon vs. Stuckart mayoral battle that never was

Bloomsday 2017 is coming; better get registered