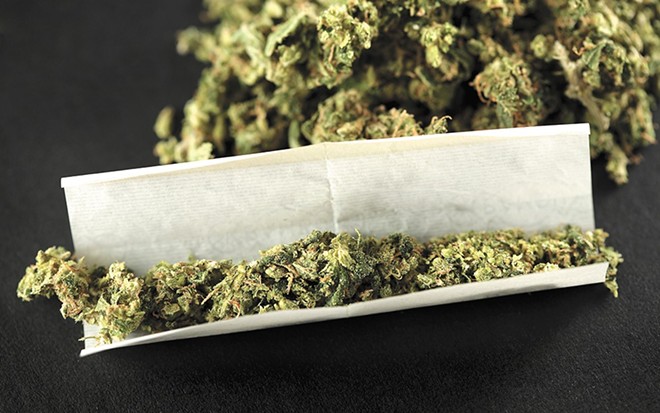 Spark one up for "The Waldos" today.
Like many of the great origin stories, the tale behind the digits "4/20" marks the beginning of the hero's journey.

4/20 is not a cop code, or Bob Marley's birthday nor does it have anything to do with Hitler's birthday (though he was born on April 20).

It's not the time of the day that you're supposed to smoke weed (though there's nothing stopping you from lighting up at 4:20). It's not the number of chemical compounds in THC, the active ingredient in marijuana, and it's not the numbers in that one Bob Dylan song multiplied.

No, the origin for the international indicator of all things marijuana — and what's become the unofficial Stoner Holiday — is much more unlikely.

The term 4/20 actually started with a group of bell-bottomed stoner teenagers in San Rafael, California. And just last month, the digits were added to the Oxford English Dictionary, where they will live on as the universal signifier referring "to cannabis or to the act of smoking cannabis." The dictionary credits a group of unlikely heroic teenagers for the term's beginning.

So the story goes, there was a group of dudes at San Rafael High School in Marin County, north of San Francisco. In the early '70s, they earned the nickname "The Waldos" because they would sit on a wall after school and smoke pot.

One day, a Waldo named Steve Capper tells Criminal podcast host Phoebe Judge, a buddy told him of a magical field of marijuana ripe for the picking. Apparently, Capper's buddy's brother was in the Coast Guard and had planted some marijuana in a field near the Coast Guard's Point Reyes Station. Concerned that he would get caught, the service member relinquished control of the mystical plot of pot, and the Waldos jumped on it.

"We were teenage boys," Dave Reddix, another Waldo, says on the podcast. "Are you kidding?"

So the Waldos hatched a plan to meet at 4:20 pm at the statue of Louis Pasteur on the high school's campus. The teens "fired up a doobie" and hopped in Capper's '66 Impala.

They didn't find the elusive patch of grass that first day, but for weeks and months afterward, they would pass each other in the halls.

"4:20 Louis," they would say with a knowing glance. And each day after school, their search would continue. Eventually, they dropped the "Louis."

The Waldos never found the weed field, but in the decades after high school, they started seeing the digits scratched into park benches and painted on signs across the country.

Reddix suspects that the term spread with the help of Grateful Dead bassist Phil Lesh. Reddix's brother, Patrick, managed a Dead side band, and they smoked with Lesh frequently, he tells the Huffington Post.

Reddix recalls hanging out at the Front Street rehearsal hall while Lesh and his bandmates practiced.

"So we used to hang out and listen to them play music, and get high while they're practicing for gigs," Reddix tells HuffPo.

Where's the proof, you say? The Waldos have documentation. Stashed in a safety deposit box in San Francisco is a school newspaper clipping and dated correspondences between them.

In a man-on-the-street-style article dated 1974, one of the Waldos was asked, "If you had the opportunity to say anything in front of the graduating class, what would you say?"

There are also several letters among the Waldos, including one from Reddix to Capper. Reddix rolled a joint, he tells Judge on her podcast, smashed it down and mailed it to Capper. In the letter dated 1975, he wrote: "PS a little 420 for your weekend."