Chemicals in the water at Fairchild, $425 for pre-muddied jeans, and morning headlines

NEWS: With a state mandate to make class sizes smaller for early elementary school students, and unexpected increasing enrollment, Spokane Public Schools are looking at changing which grades are placed at the same schools, which will hopefully save on costs to build new facilities. 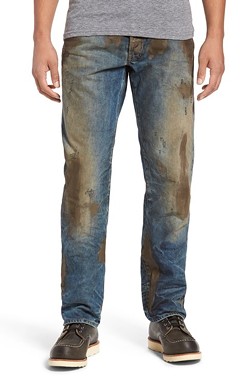 These jeans aren't really muddy, but they are really $425.

ARTS & CULTURE: There's Something Rotten about the next season of shows ready to Rent the INB Performing Arts Center, bringing The Sound of Music and their Dirty Dancing to (Mo)town, for the Best of Broadway.

Goodbye NAFTA?
Politico reports that the White House is putting together an executive order to pull the U.S. out of the North American Free Trade Agreement, possibly as a power move to renegotiate the agreement. (Politico)

Out of money? We'll throw your food in the trash, kid
An Army veteran is criticizing some Texas schools that take food from kids who can't pay for their food at the end of the lunch line and throw it away in front of them, then hand them a sandwich or other substitute meal. (KREM2/WFAA-TV)

That's so dirty
Too rich to get outside and do some good old-fashioned manual labor, but want that authentic working man's look? Nordstrom's got you covered, with a $425 pair of jeans they've made to look like they're muddy, so you don't have to.

According to Nordstrom, these jeans "embody rugged, Americana workwear that's seen some hard-working action with a crackled, caked-on muddy coating that shows you're not afraid to get down and dirty." (emphasis added)

But if you have to buy jeans that are pre-caked in mud for you, doesn't that mean you are afraid to get down and dirty? Asking for a friend...

Those of us who can't afford artisan mud stains will just have to keep dirtying our jeans with sweat and elbow grease, while you ponder just how authentic the stain on your butt pocket looks. (Kansas City Star)