The supervisor at a Quincy, Washington, onion-packing shed is accused of groping his female workers, rubbing his groin on them and "requiring or attempting to require" the women to have sex with him in order to keep their jobs.

Those allegations against Hermilo Cruz and his
click to enlarge 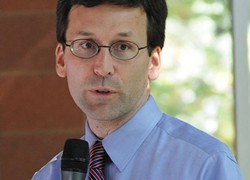 Neither Cruz, nor anyone at Horning Brothers, immediately responded to requests for comment.

The complaint filed yesterday in U.S. District Court in the Eastern District of Washington also accuses the company of sexual discrimination in its hiring practices due to a "policy and practice" since at least 2012 of hiring only women in the onion-packing shed, where Cruz is the foreman.

Cruz is also accused of requesting intimate photos and suggestively licking his lips and grabbing his groin. Employees who reported his behavior were "reprimanded, discharged or not rehired the following season," according to a news release from the state AG's Office. Cruz's conduct, and his employer's failure to mitigate it, violate federal and state law, the lawsuit says.

"Low-wage agricultural workers are part of a vulnerable population with limited resources," Attorney General Bob Ferguson says in a prepared statement. "They deserve to be heard. No woman should be forced to accept sexual harassment as a condition of her employment."

Sexual harassment of female agricultural workers is an "occupational hazard," according to the Pacific Northwest Agricultural Safety and Health Center at the University of Washington (whose website is a wealth of information and resources). The 2013 documentary "Rape in the Fields" brought the issue to the forefront.

The lawsuit asks the court to stop the illegal behavior and requests damages for the victims, but does not list a specific dollar amount.

The Washington State Attorney General's Office asks anyone with more information about this case to contact the office's Civil Rights Unit at 1-844-375-1217 or civilrights@atg.wa.gov.