MUSIC: The 15th Sasquatch! Music Festival took place over the weekend, and the Inlander was there (well, not all of us; only the lucky ones). Here are two dispatches from the music festival, on soul singer Charles Bradley and the Dutch indie band Klangstof.

After three days of silence, President Trump finally tweeted a condemnation of Friday's double murder on a Portland train.

White supremacist in Portland harasses women, murders two men defending them
On Friday, a man on a MAX train in Portland was spewing racial and anti-Muslim insults at two women. When three men tried to stop the hate speech, the man allegedly stabbed them, killing two of the men and injuring a third. The alleged murderer was a white supremacist who Willamette Week interviewed at a "free speech" rally in Portland on April 29.

Many people demanded that President Trump condemn the murder of those standing up to hate speech. After three days of silence, he finally tweeted yesterday that the "violent attacks" against the men murdered for defending a black woman and a Muslim woman were "unacceptable."

Tiger Woods arrested for DUI
Former golf great Tiger Woods was arrested early Monday morning for DUI near his home in Florida. An officer found him asleep at the wheel, with the car running and brake lights on. (Sports Illustrated)

Hiker missing
A hiker is presumed dead after he apparently fell from a cliff at Palouse Falls State Park. (KXLY)

White House shake-up
White House communications director Michael Dubke is resigning, and other staff changes could come by the end of the week, the New York Times reports.

What you did (and didn't) miss at the Sasquatch! Music Festival 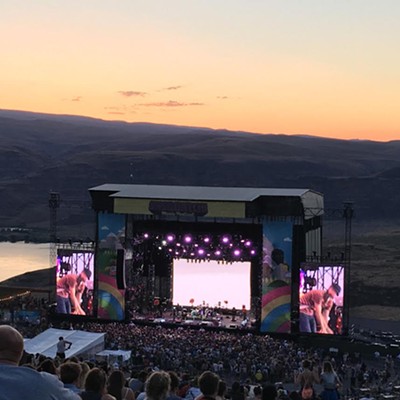