Empire Health Foundation is suing the for-profit company that bought Deaconess and Valley hospitals along with the Rockwood Clinic in 2008, claiming the company has shorted the community on charity care by at least $55 million.

CHS on the other hand, argues that the complaint misconstrues the contract and state law.

When the sale was closed and Empire Health Foundation was formed, the foundation filled the shoes of the seller, and is now able to enforce the agreement, explains Ele Hamburger, an attorney representing Empire Health.

When the state Department of Health gave CHS permission to do business as a hospital through what's called a certificate of need, part of that was contingent on CHS making reasonable efforts to meet or exceed regional levels of charity care, Hamburger says.

But the foundation claims that according to publicly reported data, the two hospitals provide less charity care than other Eastern Washington hospitals on average.

From 2009 to 2015, the costs used to calculate charity care went up 14.7 percent each year at Valley Hospital, and 9.4 percent at Deaconess, compared to an average 6.1 percent per year at other Eastern Washington hospitals. Taking that into account, the difference in charity care could actually be as high as $110 million, the complaint alleges. 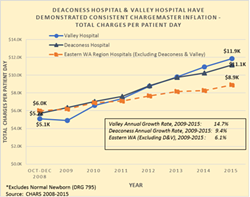 From the complaint filed in U.S. District Court
“This artificially increased the prices for care they delivered,” says Antony Chiang, president of Empire Health Foundation. “It’s like if you donated 10 cars each year to charity, and they were each worth $1,000, and if you said over time those same cars are worth $2,000. So you now only have to donate five cars to make it look like you’re still donating $10,000.”

But CHS argues that it has met both the requirements of the sale agreement and state law. Tomi Galin, the company's senior vice president of corporate communications and marketing, writes in an email to the Inlander:


But the state hasn't been enforcing charity care, partly due to a lack of manpower, Hamburger says.

Her firm, Sirianni Youtz Spoonemore Hamburger, successfully brought a case against hospitals in Yakima because charity care wasn't being enforced, and got a $4.5 million settlement after the court held that the hospitals weren't properly screening people for charity care before charging them for services.

In a statement on the Spokane complaint, CHS says the hospitals “have fulfilled all of the obligations outlined in the purchase agreement and the requirements of the Washington state Department of Health."

What's more, the current charity care policies are "more expansive and generous than the policies that were in place when Empire Health Services ran the Hospital," and were approved by both Empire and the Department of Health, Galin writes.

As for the rate increases referenced, they "are a non-issue because the dollars spent by the Hospitals as a percentage of total patient revenue generally increased over those years," Galin writes. "More importantly, the number of individual patients served by the Hospitals through charity care programs and Medicaid increased year-over-year every single year."

Should Empire prevail, the award would go to the foundation, which would then decide where and how to use the money.

The foundation's mission is to "invest in ideas and organizations that improve access, education, research, public policy and wellness to result in a measurably healthier region."

The foundation tries to support programs and health for exactly the population that would qualify for charity care, foundation president Chiang explains.

"Indigent patients, these are the very folks we are most focused on," he says.

CHS intends "to vigorously contest the baseless allegations of the Empire Foundation lawsuit,” Galin says in a statement.

The filing of the complaint comes as the not-for-profit MultiCare Health System is finalizing an agreement to buy the hospitals from CHS.

"We think these are two separate things. It shouldn't impact the closing of that deal," Hamburger says. "But we did want to file it before the Washington state entities that own the hospital now are dissolved."