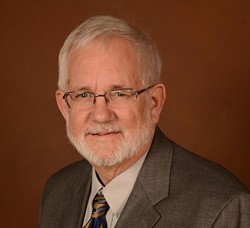 Spokane Valley City Councilman Ed Pace doesn't believe that it's the role of government to care for needy children.
Across the world, 1 in 5 children live in poverty, and 1 in 8 faces food insecurity. The United States ranks near the bottom among wealthier countries in caring for children, according to a report released today by UNICEF.

Locally, children face a number of obstacles both in school and at home. Thousands of students between Spokane and Spokane Valley are homeless, or have to stay with a friend or relative just to have a roof over their head at night. Kids are sometimes raised in homes where they are abused or neglected, then placed in a foster care system lacking in foster homes or adequate facilities.

But for Spokane Valley Councilman Ed Pace, these are things that government shouldn't focus on.


The post generated backlash, as far as Twitter interactions with a local government representative go. People pointed out that, in fact, many parents don't care for their children. "The greatness of a country is MEASURED by how well it cares for its children and the most vulnerable," responded one person. Others questioned the morals of Pace, who is a Lutheran pastor.

Pace has never been shy about his libertarian views, so the Inlander called him today to find out what he meant by saying countries shouldn't care for children.

Pace says he was responding to a story on National Public Radio about the study done by UNICEF that said the U.S. was low on the list of taking care of its children. When he tweeted "countries," he meant that "government" shouldn't care for children, he says.

"Parents have authority and their children," Pace says.

Parents, he says, should have the final say over what kids learn. And if a parent can't take care of a child, then "extended family should step in and help out," he says. He cites examples of when his own family has taken care of children whose parents couldn't take care of them — including his niece and nephew, who were refugees, he says.

"When the government steps in, that undermines the values of the traditional extended family and undermines their sense of responsibility," he says.

When asked what happens if there is no extended family to care for a kid, he first points out that it's a problem that there are so many single parents. People shouldn't be getting pregnant if they can't afford to take care of it, but "if they can afford a kid then they should have a kid," he says. Second, he says the Christians should step in and help take care of children with no parents.

"Society, working through faith communities and other people of good will, needs to dig down into the root cause of why there are families or kids — why are kids left hanging without care? — we've gotta get to the root cause," he says. "No. 2, we have to stop enabling people, and families, and saying if you get pregnant then the government will take care of it."

There are parents in the world who abuse or neglect their kids, unfortunately. "That's a whole different thing," Pace says. Those should be dealt with like a crime, and the victim of a crime should be cared for.

And what about the government programs that help kids, like Head Start, which provides early childhood education, and health services to low-income children and families? Or WIC, a federal program that gives food to pregnant women to help prevent premature birth or low birth weight, both of which influence children's cognitive development and school performance?

Pace says he would advocate for cutting off Head Start, but to first spend money on why Head Start is needed and "turn it over to the private sector."

But he says that the government should mostly stay out of efforts to fight homelessness among kids. The number of homeless students in Central Valley School District — just like the rest of the state — is rising, according to the state Office of the Superintendent of Public Instruction. In the 2015-16 school year, 115 Central Valley students either had no home, or slept in a shelter, or in a hotel or motel, says OSPI data. Another 374 kids in the district slept in another home or were "doubled up."

Pace points to an organization in Spokane Valley called Spokane Valley Partners, a coalition of nonprofits that provides food, clothing and needs to low-income families. It's the kind of faith-based organization that Pace thinks there needs to be more of to combat issues facing kids. And though Pace acknowledges that the homeless population keeps growing even with organizations like that, his stance on not interfering holds firm.

"Again," Pace says, "I don't think the government should jump in and try to fix it."

March for racial justice planned for Saturday, a month after white man acquitted in the killing of black man in East Central

The cost of reduced school suspensions, Amazon gobbles up Whole Foods, and other morning headlines