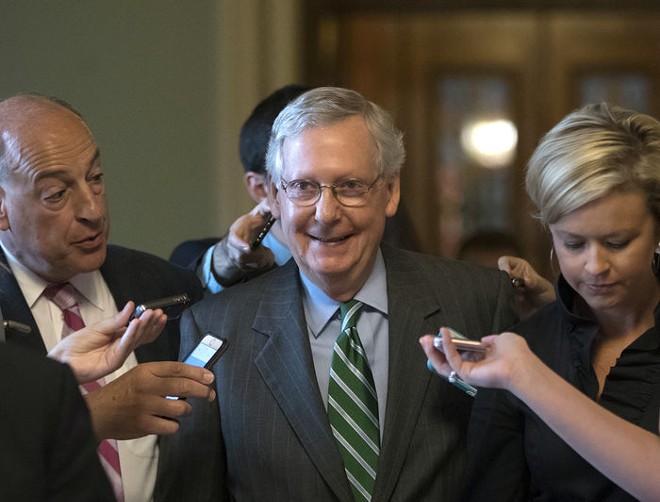 Senate Majority Leader Mitch McConnell may be happy, but experts worry that by eliminating the individual mandate, the Senate's proposed health care bill threatens to tank the individual market.
ON INLANDER.COM

Shutdown looming
A rally yesterday in Spokane implored the Washington state legislature to come to some sort of agreement to prevent a government shutdown on July 1.

Impatient for change
Local civil rights leaders aren't happy with the pace of progress to fix inequities in the justice system.

Pot stops
With small amounts of marijuana no longer illegal in Washington, traffic stops resulting in searches have plummeted.

Zags duo drafted
Two Gonzaga players were selected in Thursday's NBA draft: forward/center Zach Collins was traded to the Portland Trail Blazers  after being picked 10th overall by the Sacramento Kings, and guard Nigel Williams-Goss was taken in the second round, 55th overall, by the Utah Jazz.

Unfilled
The Spokesman-Review looks into why the city pays so very few pothole claims.

Justice delayed
Evidence that helped acquit Jason Obermiller of murdering a 2-year-old girl last year in Spokane was not disclosed by prosecutors until mere minutes before their last witness was called. (Spokesman-Review)

Kentucky Mitch and the spiral of doom
The Senate's health care bill threatens to send the individual market into the death spiral that Republicans were always warning about with Obamacare. (Vox)

Loss leader
Nancy Pelosi, the Democratic leader, has overseen massive losses for her party and has become an easy target for Republican ad makers. But she doesn't think that should be held against her. (New York Times)

Putin's provocation
The Washington Post reveals the inside story of how President Obama struggled to figure out how to respond to Russian hacking in the final weeks of last year's election.