NEWS: Fairchild Air Force base is a global force; nevertheless, some still worry about its future.

NEWS: Has the public been kept in the dark about major changes to the Riverfront Park renovation? 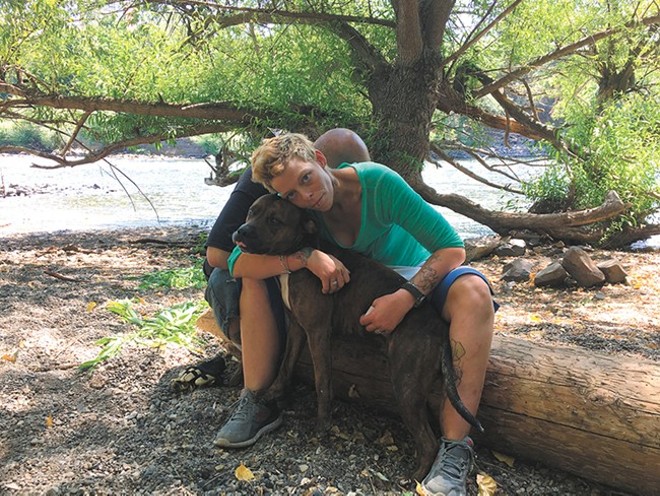 Mitch Ryals photo
Destiny Brown, a homeless woman from Pennsylvania, and her dog Mister were forced to leave an area where she had been camping on the north bank of the Spokane River, below Kendall Yards.

Three sides to the story
Last week, we wrote about how KHQ failed to get all sides of the story when one of its reporters seemed to mock a homeless encampment and called city code enforcement on those living there. The Spokesman-Review reports that the homeless camp has now been cleaned out. The original version of the Spokesman story included KHQ's role in the controversy, along with the Inlander's coverage of it. Within hours, those sections were deleted. (Note: KHQ is owned by the Cowles Company, which also owns the Spokesman-Review).

Sold to a giant
Liberty Lake company Telect Inc., a telecommunications hardware company, was sold to Amphenol Corp, a much larger company based in Connecticut. Now known as Amphenol Telect, the company will keep its 230 employees in Liberty Lake. (Spokesman-Review)

Latah County homicide
New details have emerged in the death of Tim Reeves, the young man allegedly killed by Keagan Tennant, son of Pullman police commander Chris Tennant. Court documents say Reeves and Tennant were playing Russian roulette with guns when Tennant's rifle went off, shooting Reeves in the face. Tennant, 17, has been charged with involuntary manslaughter and attempted murder, among other charges. (KREM)

Justice Department: Gay people aren't protected from discrimination
On the same day President Trump announced on Twitter that transgender people would be banned from the military, the Department of Justice filed court papers arguing that a major civil rights law does not protect from discrimination based on sexual orientation. (New York Times)