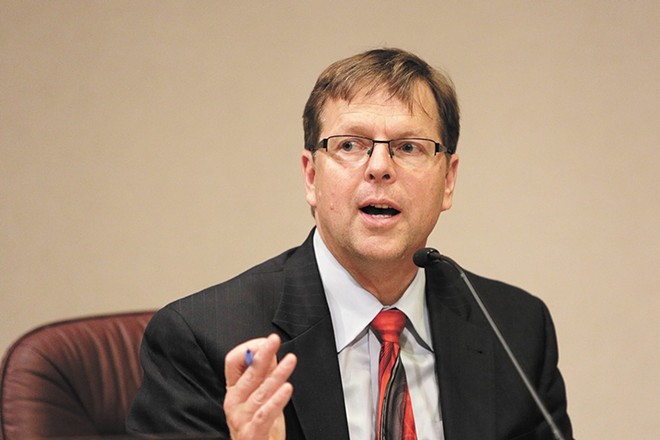 City Councilman Breean Beggs racked up 56 percent of the vote against two challengers in the District 2 primary.
ELECTION CENTRAL

This is what the 10-person Spokane City Council field looked like Tuesday, and here's how the three council races stand, broken down by district, after a primary election that has now seen 22 percent of eligible voters in Spokane County mail in their ballots; the top two vote-getters in each nonpartisan race advance to November's general election.

• Tony Hazel, appointed to replace the late Sam Cozza in May, received nearly 52 percent of the vote against two opponents in the race for Superior Court Position 6.

• Incumbent Mike Wiser is way out in front in the race for Spokane School Board Position 5, with 58 percent of the vote in a four-way contest.

• And for the first time in 91 years, Seattle will elect a woman as its mayor in November, when former U.S. Attorney Jenny Durkan will face either urban planner Cary Moon or attorney and activist Nikkita Oliver in the race to succeed Ed Murray. (The Stranger)

Getting hotter — and smokier
Spokane County is among seven Eastern Washington counties under a National Weather Service air quality alert in effect through Saturday. Winds carrying smoke from wildfires in British Columbia and western Montana — and the Noisy Creek fire, near Sullivan Lake in Pend Oreille County, which has grown to 1,700 acres — will combine with temperatures expected to fall just short of triple digits in Spokane by Friday. (Spokesman-Review)

Mt. Spokane expansion plan gets go-ahead The state Supreme Court ruled that Mt. Spokane ski resort can go ahead with a planned 80-acre expansion on the back side of the mountain. Construction begins tomorrow on the area, expected to be operational for the 2018-19 season. (Spokesman-Review)

Air Force Один?
The Hill writes that the Pentagon plans to buy two Boeing 747-8 aircraft abandoned by a bankrupt Russian airline to become the new Air Force One. Trump, citing "out of control" costs, has threatened to cancel plans for a new presidential aircraft.

Puff, puff... unlikely to pass
New Jersey Sen. Cory Booker has introduced the Marijuana Justice Act, which would legalize cannabis at the federal level, and provide incentives for the 42 states that have not legalized it to do so. (Politico)

Lightning strike kills U of I professor
Samantha Ramsay, a faculty member in the University of Idaho's nutrition department and a former star athlete at Coeur d'Alene High School, was killed by a lightning strike while climbing in the Swiss Alps. (CdA Press, Moscow-Pullman Daily News)

Spokane Brewers Festival this weekend won't allow all ages, after all