SPORTS: Jud Heathcote, who played basketball at Washington State College (that's right; it wasn't yet a university) and coached at West Valley High School, WSU and Montana before winning the 1979 NCAA title with a Michigan State team featuring Earvin "Magic" Johnson, died Monday at 90 in Spokane. Here's a Heathcote profile the Inlander wrote in 2009. 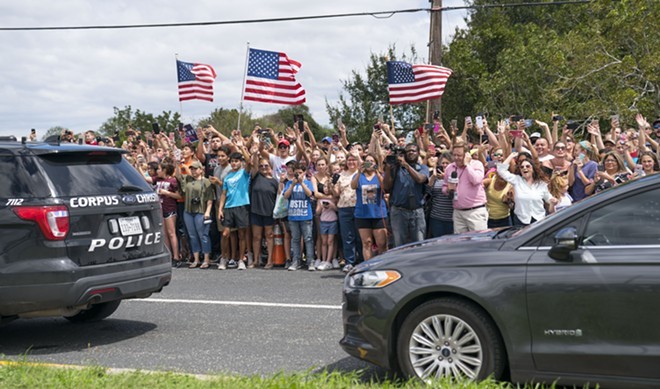 The New York Times
President Trump was very impressed — by the size of the crowds he drew in his visit to flood-ravaged East Texas.

Arrest made in WSU bomb threats
Washington State University police have arrested and charged an 18-year-old WSU sophomore with making a series of three bomb threats; turns out it was the same student who "discovered" the threats and reported them to authorities. (Spokesman-Review)

Hurricane/Tropical Storm Harvey roundup
• Moving east: With the massive storm's death toll rising to a confirmed 30, now-Tropical Storm Harvey made landfall for a second time early this morning in southwest Louisiana. (New York Times)
• Cajun Navy: Volunteers from Louisiana, and their ragtag armada, have emerged as among the heroes of Harvey. (Washington Post)
• 21 trillion gallons: All the water that's fallen on Houston, in one massive raindrop. (Vox)
• President Trump is impressed: With the size of the crowd he drew Tuesday in his visit to flood-ravaged East Texas, that is. Will White House Chief of Staff John Kelly break it to the president that it wasn't a campaign rally? (New Orleans Times-Picayune)
• Best Buy: The retailer said it is "deeply sorry" following accusations of price-gouging: It charged more than $42 for a case of water at a Houston-area store. (CBS News)
• Joel Osteen: The multimillionaire "prosperity gospel" televangelist was shamed on social media into finally opening his 16,000-seat megachurch in downtown Houston to victims of the massive floods. (Houston Chronicle)
• Ann Coulter: On Twitter, the right-wing media pundit posited a novel theory: That Houston having elected a lesbian mayor in 2009 is a more credible explanation for Hurricane Harvey than the forces of climate change. (Patheos)