NEWS: There's a new undersheriff in town; he's already been behind many innovations within the Spokane County Sheriff's Office.

NEWS: With few other options for health care, homeless people can now turn to the newly expanded Providence House of Charity clinic. 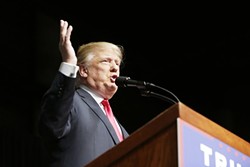 Trump threatens North Korea
This morning, in a speech to the United Nations, President Trump said that "we will have no choice but to totally destroy North Korea," if the United States is forced to defend itself or its allies. He then proceeded to call North Korean leader Kim Jong-un "Rocket Man," asserting that Kim is on a "suicide mission for himself." (New York Times)

They call the wind Maria
Category 5 Hurricane Maria is storming through the Caribbean, last night pounding the small island of Dominica. With sustained winds of 160 mph, it's headed toward islands already wrecked by Hurricane Irma. (Associated Press)

Nazi knocked out
A video that's gone viral on social media shows a man wearing a swastika armband getting punched in the face and knocked out in downtown Seattle. Police responded, but said there is no investigation underway, as no one reported a crime. (Seattle Times)

YMCA of the Inland Northwest welcomes refugees, immigrants with events this week