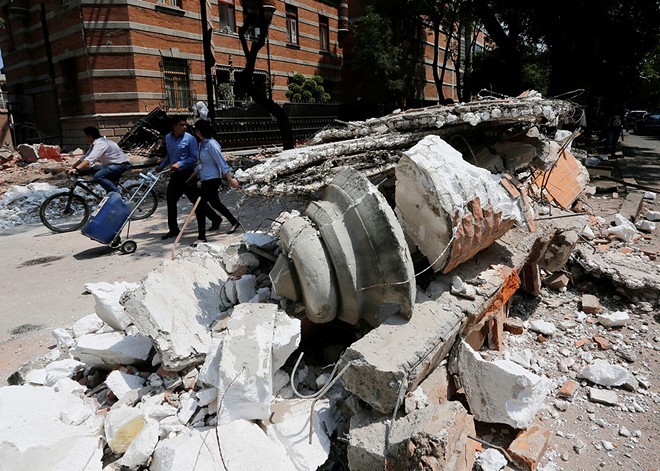 The New York Times
People in Mexico City walk past debris after an powerful 7.1 earthquake struck the metropolitan area of 21 million.
ON INLANDER.COM

EARTHQUAKE: A 7.1 quake struck the central Mexican state of Morelos yesterday; the epicenter was 76 miles south of Mexico City, where at least 44 buildings are reported to have collapsed or been severely damaged, with many people buried under the rubble. The death toll, currently more than 200, is expected to rise. (via New York Times)

Maria slams Virgin Islands, Puerto Rico
After striking the U.S. Virgin Islands as a Category 5 storm, leaving widespread flooding in its wake, Hurricane Maria weakened slightly to Category 4 before slamming into Puerto Rico this morning with winds of 155 miles per hour; at least 12 of 18 inches of rain are predicted, and the entire island is expected to lose power. (New York Times)

I-90 crash claims life of Spokane artist
Michaelanne Foster, a Gonzaga Prep graduate who grew up in Spokane and was a member of the city's Richmond Art Collective and an Inlander contributor, died on Monday night when the car she was driving struck the rear end of a stopped semitruck on I-90 near the Freya overpass. She was 24. (Spokesman-Review)

Preu to hang up his baton
Eckart Preu, the Spokane Symphony's longtime music director and conductor, announced that the 2018-19 season would be his last with the orchestra he has led since 2004. (Spokesman-Review)

No boundaries here
Bonners Ferry's Boundary County Library has been named the 2017 "Best Small Library in America" by Library Journal magazine. The annual award, which comes with a $5,000 prize, honors exemplary work of libraries serving populations under 25,000, more than double the size of the North Idaho county. (Spokesman-Review)