After a months-long process that stirred controversy
click to enlarge 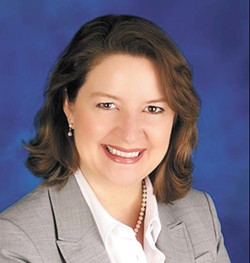 Kuney, the county's chief deputy auditor, was among  three candidates  chosen by the Spokane County Republican Party to fill the open seat vacated by Shelly O'Quinn, who resigned in June. County Treasurer Rob Chase was the first choice of the Spokane GOP precinct committee officers, Kuney the second, and John Guarisco, a marketing consultant, was the third choice.

Kuney, in a statement, said she was "humbled and honored" to be appointed to the county commission.

"I'd like to thank all the people in Spokane County who sent in letters on my behalf, as well as the many elected officials who endorsed me for the appointment," Kuney says. "I would also like to thank the Governor and his staff for acting quickly."

The choice was only sent to Gov. Inslee after the two current commissioners, Al French and Josh Kerns, were unable to decide on one out of the three candidates. Local Republican Party members have said that Kerns preferred Rob Chase, but French preferred Kuney.

In announcing that no decision would be reached by the commissioners earlier this month, French said that libertarian-leaning members of the local Republican Party tried to strong-arm French into voting for Chase. Some criticized French for not picking the top choice of the Republican PCOs, though French responded by pointing out that nowhere in the state constitution does it mandate that he was required to pick the top choice.

"Since we began this process back in July, it has been long and arduous," French said in a statement. "Mary is going to be hitting the ground running. I know she's up for the challenge, and I look forward to working with her to get the business of the county done."

Kerns said all three were "great candidates." He says that Kuney's background as a certified public accountant will help the county, which is facing a budget shortfall for 2018.

"I anticipate having a great working relationship with Mary as we continue working on behalf of the citizens of Spokane County," Kerns said.

Hey, Amazon, this is why you're not going to pick Spokane as your second HQ