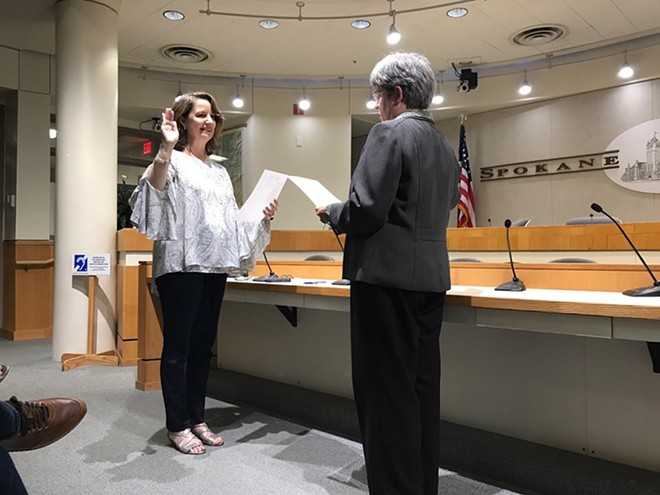 Courtesy of Spokane County
Mary Kuney was sworn in as a Spokane County Commissioner on Friday, Sept. 29.
The details of a county budget may not excite the average citizen. But for a former accountant and state auditor like Mary Kuney, there may be nothing more enticing than the challenge of balancing a budget that has a shortage of revenue.

That's the situation that Kuney has been thrust into since being appointed to the Spokane County Board of Commissioners weeks ago. And it's a challenge she relishes. After all, it was her experience as a Certified Public Accountant and a state auditor for 10 years that inspired her to run for office in the first place.

Kuney hopes, by focusing on the details, she can be one of the good ones.

It wasn't the first time Kuney faced off against Rob Chase. Kuney lost to Chase in the election for county treasurer in 2014. This time, with Inslee choosing, she got the nod.

The process exposed different factions of the local Republican Party. Chase, for example, saw support from libertarian-leaning Republicans who threatened that they'd have someone run against French if he didn't pick Chase. But Kuney says she didn't want to get caught up in that.

The county faces a $10 million budget shortfall. Commissioners have asked each department head to cut its budget by 7 percent. That could mean fewer deputy positions in the Spokane County Sheriff's Office, and fewer prosecuting attorneys. This week, the commissioners held budget hearings with each department, trying to find ways to slash the budget with a minimal impact on county services.

Kuney says, overall, the budget hearings were successful in explaining what it is that each department does. Still, she thinks someone with her background can help with the details — she's already found herself pointing out when information was missing from spreadsheets provided by departments.

"I felt it was very beneficial," Kuney says. "They gave us a very good perspective that we need to look back and analyze where we can cut, where we can't cut, and what we can do to balance our budget this year."

Earlier this year, commissioners supported sending a proposition to raise property taxes to county voters in order to solve the budget shortfall, then changed their mind a month later. Kuney says she can't say what she would have done if she were commissioner then. And when asked if she would support a tax increase in the future, she's noncommittal. She says she won't commit to "no new taxes," because she thinks sometimes it's necessary "as a last resort."

"I'd need to see how all this falls out and take a look at it first," she says.

Outside of knowing how to balance a budget, however, Kuney admits there's a learning curve. She has no background in public safety, which makes up a large portion of the budget. She says she needs to learn more about criminal justice before she has a stance on key issues.

The same goes for homelessness. Kuney is on the board of directors of the Hutton Settlement, which strives to improve the lives of children by providing them with safe and stable housing. She says the number of homeless youth in the county is an issue, but hasn't yet taken a position on what the county can do to help.

What she can do, she says, is help the departments in Spokane County work together more effectively. As an employee with the county, she says there's room for better communication between departments.

As for balancing the budget longterm, she says eventually the Washington legislature will have to change the way counties are funded so that expenses aren't always outpacing revenue.

"We just have to work with the legislature to fix the situation," she says. "Because we can't sustain where we're at."

Follow the money on Prop 2: big bucks on one side of coal & oil train initiative

Create Your Own Text-Based Video Game