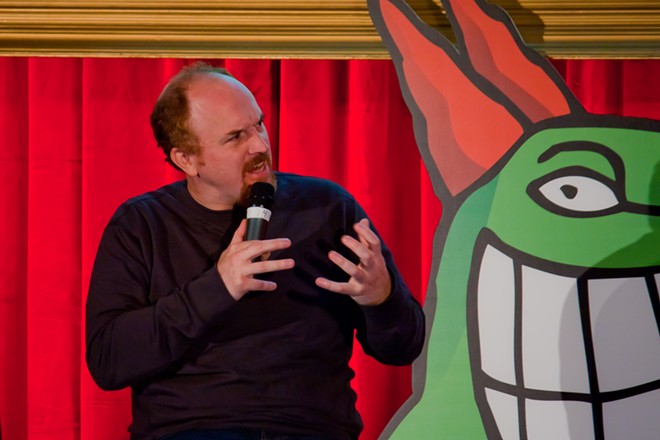 Wikimedia Commons
One of your favorite comedians might just be a super creep.
ON INLANDER.COM

Let's talk about sex ed, baby
Spokane Public Schools won't be adopting that controversial, Planned Parenthood-developed sex-ed curriculum after all, despite few objections being raised about anything regarding its content.

the "band kid?"
Why marching band programs have either been eliminated or scaled back at Spokane high schools. (Spokesman-Review)

Mission: McMorris Rodgers
Despite never receiving more than 40.4 percent of the vote in the past decade against Spokane's U.S. Rep. Cathy McMorris Rodgers, Democrats will try to take her down next year.  (Spokesman-Review)

Middle-out
A Senate GOP tax plan would focus on the middle class instead of giving a major cut to corporations, a significant difference from the House version. (New York Times)

Bill Cosby is no role model
The New York Times brings the long-simmering allegations against Louis C.K. to light, as five women accuse him of super-creepy things. (New York Times)

Yet Moore sexual allegations
Alabama Republican U.S. Senate candidate Roy Moore allegedly initiated a sexual encounter with a 14-year-old when he was 32, which, from our elitist liberal perspective, is also super creepy.  (Washington Post)