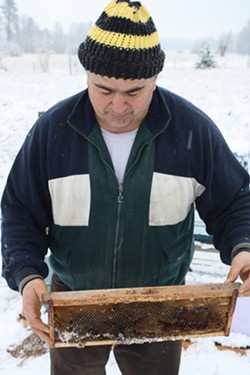 Local beekeeper Will Olson says some of his fellow beekeepers have put GPS trackers in hives to prevent theft.
NEWS: Did you know that bees are brought from all over the country (including here) to help pollinate California almonds? Or that there are bee thieves?!

Spokane police arrest truck driver accused of striking, killing woman
Spokane police have arrested the driver of a pickup truck accused of hitting and killing a woman at East Holland Avenue and North Colton Street on Saturday night, then fleeing the scene. (Spokesman-Review)
Freedom of speech... or nah The Supreme Court announced it will hear three First Amendment cases at the start of next year, the Washington Post reports, including a California case regarding whether the state is legally requiring crisis pregnancy centers, which typically push women to keep pregnancies, to also provide information on the state's contraception and abortion services.

Guinea pigs for gas tax replacement?
Washington state is still looking for about 1,000 volunteers to test a new method of taxing people to pay for roads (eventually by miles driven, rather than gallons of gas purchased); they want people from both rural and urban areas, with low and high gas mileage, the Yakima Herald reports.

See you in court: A running tally of the times Washington has sued the Trump administration