If you don't already have tickets to Suds & Cinema this week, you're shit out of luck. It's sold out.

Red alert! Only one week left to get your Christmas shopping done (if you're into that sort of thing). But keep your sanity through the crowds by entertaining yourself, too, using our event listings and staff picks for guidance.

Here are a few highlights of the week ahead:

COMMUNITY | It's Family Skate Night at the new Spokane Ice Ribbon, meaning sweet deals (as in, free skating for the first 500 people!) and fun for the whole gang downtown. 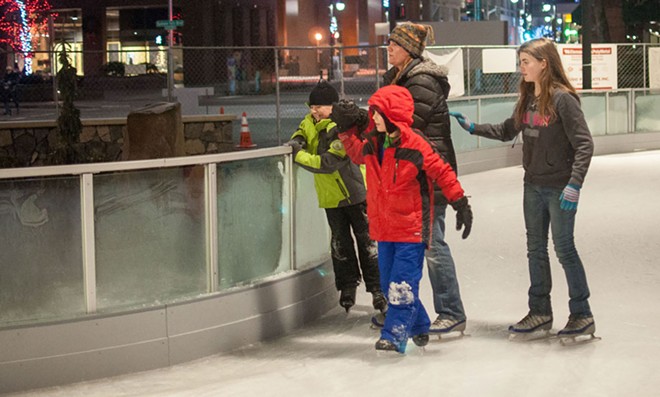 MUSIC | Need another shot of holiday tunes? Bring your guitar and join the Holiday Open Mic at The Bartlett tonight.

SPORTS | It's that rare occasion when WSU's men's basketball team descends on the Spokane Arena to host a game, this time against the Big 12's Kansas State. Should be a competitive game, and it beats the drive to Pullman for Coug hoops fans.

VISUAL ARTS | Drop in and Draw at Spark Central today. No judging!

FILM | If you don't already have a ticket, you're out of luck. Our Suds & Cinema screening of National Lampoon's Christmas Vacation is sold out and going to be a blast.

WORDS | The Spokane Writes anthology is out, and you can get your copy signed at Auntie's today.

THEATER | I love me a radio play and the Spokane Civic Theater is hosting The Miracle on 34th Street tonight and Saturday. It's a blast to watch the sound effects folks and voice actors work together, so get there.

COMEDY | The Spokane Comedy Club hosts Zoltan Kaszas, a talented guy who's won the Seattle International Comedy Competition. He's here Thursday through Saturday, so pick a night and have some laughs.