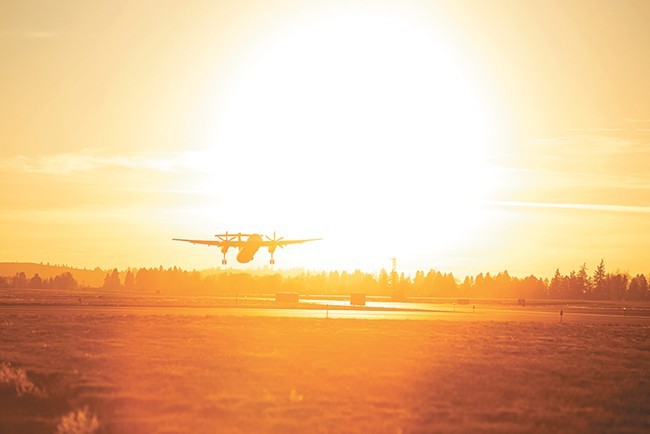 Young Kwak
Spokane hopes to bring Boeing to the region to manufacture a new midsize airplane
Months after county, the city and the airport teamed up to form a group that will attract development to the West Plains, local leaders say they have their eyes on their target: Boeing.

The West Plains PDA and Greater Spokane Incorporated will recruit Boeing to the Spokane region for the design, production and assembly of a new midsize airplane, called the "NMA" airplane. The groups will create a task force aimed at attracting the new plane and a major economic opportunity.

Larry Krauter, CEO of Spokane International Airport and Chairman of the PDA board, tells the Inlander it would be a "tremendous" shift in the regional economy if Boeing were to choose West Plains.

"We'd be looking at direct job creation of hundreds of jobs, if not more, and of course the multiplier impact of those jobs throughout the supply chain and the potential to attract additional businesses," Krauter says.

Boeing unveiled its concept for a midsize airplane earlier this year. It would seat 220 to 270 passengers, and it would have a range of up to 5,750 miles. The company is expected to announce the launch of the airplane in 2018.

Krauter says this kind of opportunity is exactly why the PDA was created in the first place. He says the task force, the PDA board and local elected officials will help develop a proposal to attract Boeing to Spokane.

Local leaders have recruited Boeing for other manufacturing opportunities, like the Boeing 737 MAX airplane in 2011. But Krauter says the chances for Spokane to land Boeing this time look better. With the 737 MAX, he says, the Boeing Everett site made sense because it already had the infrastructure in place to manufacture that plane.

But Krauter says the airport would have the infrastructure for a new aircraft like Boeing's NMA. He notes the airport received funding for a rail, to be completed in 2018, that would extend directly into the site proposed for a Boeing NMA plant. "I do think the chances are better now than before," Krauter says.

But there are no guarantees Boeing will even decide to produce the jet in Washington, let alone Spokane. Last week, Gov. Jay Inslee announced a campaign to persuade Boeing to build the plane in Washington. He created the "Choose Washington NMA Council," which will advocate for Washington as a low-risk, profitable location for the plane production. The council includes representatives from King, Pierce, and Snohomish counties and Greater Spokane Incorporated.

"Washington state is the best place for Boeing to build the NMA, bar none, and I'm looking forward to making that case directly," Inslee says in a statement.

Todd Mielke, CEO of Greater Spokane Incorporated, says in a press release that Boeing has been an economic driver in Washington, and he notes GSI wants them to continue making aircraft in the Pacific Northwest. Yet he touts Spokane's cost of living, its education, and its growing workforce.

"The Spokane region has one of the nation's fastest-growing workforces in the 18-34 age group. We have great educational programs from pre-K to post-graduate opportunities, a short commute time that is a fraction of the congestion experienced in other parts of the country, and extremely affordable housing," Mielke says.

Invited to the task force are representatives from Spokane County, cities within the county, Spokane Area Workforce Development Council, local colleges and school districts. The group's first meeting is anticipated to take place next month.

Are Zags' struggles a trend, or just a blip as Gonzaga heads toward WCC play?