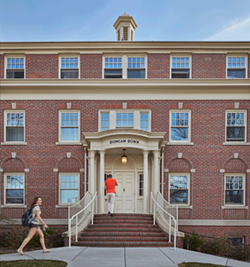 Courtesy of WSU
Duncan Dunn Hall, where a student in August fell from second-story window
Six months after a WSU student suffered serious injuries in a fall from a second-story window on campus, the university has released a report with recommendations on how to prevent future falls.

Among the safety changes that WSU will make based on the report: making beds near windows safer.

WSU students falling from balconies or windows has been a problem in recent decades. In the last 21 years, the Inlander has counted more than 30 falls from WSU students. That includes the 18-year-old student who was hospitalized after he fell out of a window at Duncan Dunn Hall in August 2017.

"One accident is too many," says WSU Mary Jo Gonzales, vice president for student affairs, in a statement. "We never want to see a student get hurt."

Overall, the report found that on-campus falls were rare at WSU. And that is true: Of the accidental falls since 2000 resulting in student injury, only four happened on WSU's campus. Most of the falls took place in off-campus houses, like fraternities or sororities. And as WSU spokesman Phil Weiler says, the school doesn't have the authority over fraternity and sorority buildings. With alcohol consumption proving to be a major factor in many of the falls, the university has focused on combating underage drinking.

But the father of the student who fell in 2017 thinks students shouldn't be able to just fall out of windows, no matter if they're drunk or not, according to a Spokesman-Review story in September. The father, Jim Gray, launched a campaign to #fixthewindows at WSU that included a change.org petition and a website called fixthewindows.org.

WSU has said it's restricted in what it can do with windows because of fire codes. The consultant did recommend potential changes to windows that could be made, but Weiler says that's the "only recommendation that we're not pursuing." Instead, the university will focus on making bunk beds or lofted beds safer, since they are often near windows. Today, WSU announced that based on the consultant's recommendations it would implement safety measures that would do just that. Those include:
You can see WSU's news release on the report here, and the consultant's report can be found here.