NEWS: Washington State University is focusing on bunk bed safety to prevent students from falling out of windows on campus.

ARTS & CULTURE: Comedian Hannibal Buress is coming to The Knitting Factory on May 11. Tickets go on sale Friday at 10 am.

NEWS: The Supreme Court kept DACA alive for a few more months by declining to hear the government's appeal of a decision that left major pieces of the program in place.

Joining together
At least nine newspapers in the state have published front-page editorials urging Gov. Jay Inslee to veto a bill that exempts the state Legislature from the Public Records Act. (Seattle Times) 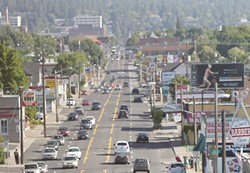 Monroe 'road diet' approved
Despite opposition from many businesses on the street, the Monroe "road diet" is full steam ahead after the Spokane City Council approved a contract to begin work on North Monroe in early April. (Spokesman-Review)

Ennis' defense
The first day of a trial in which former Spokane police Sgt. Gordon Ennis is charged with rape focused instead on how much the victim had to drink that night. (Spokesman-Review)

How to stop school shootings
Gov. Jay Inslee confronted President Donald Trump yesterday, telling him to listen to teachers who are saying they don't want to be armed. Meanwhile, Trump has assured the American people that in the event of a mass school shooting, even if he is unarmed, he will run in to save students from gunfire. (Huffington Post/New York Times)