Moving, reusing, teaching
Art Salvage is moving into a new space big enough to hold workshops and classes as well as serve as a storefront for the nonprofit's reused and repurposed art supplies. They need some unpacking help this Saturday. 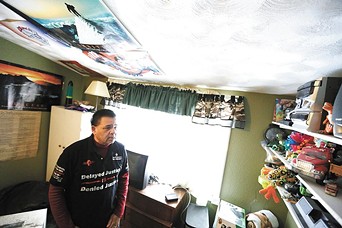 Young Kwak
Ron Simon walks through the bedroom of his son, who hasn't been home in nearly three years
De facto parents and paid surrogates
A couple of Washington bills are addressing parental rights similar to those highlighted in this week's cover story, though the legislation got more attention for policy changes involving surrogate mothers than the changes involving "de facto" parental rights, which are at the heart of the Spokane story.

Avalanches claim Washington lives
It usually takes two years for Washington to see an avalanche death toll like this week's, as five people died in the Central Cascades. (Seattle Times)

And the winner is...
The Shape of Water took best picture at the 90th Academy Awards ceremony, Frances McDormand and Gary Oldman took best actress and actor, and here are the rest of the winners. (New York Times)

What time is it
An Idaho senator has proposed one time zone for all of Idaho, but only if Washington stops changing its clocks for Daylight Savings Time, too. (Idaho Statesman)