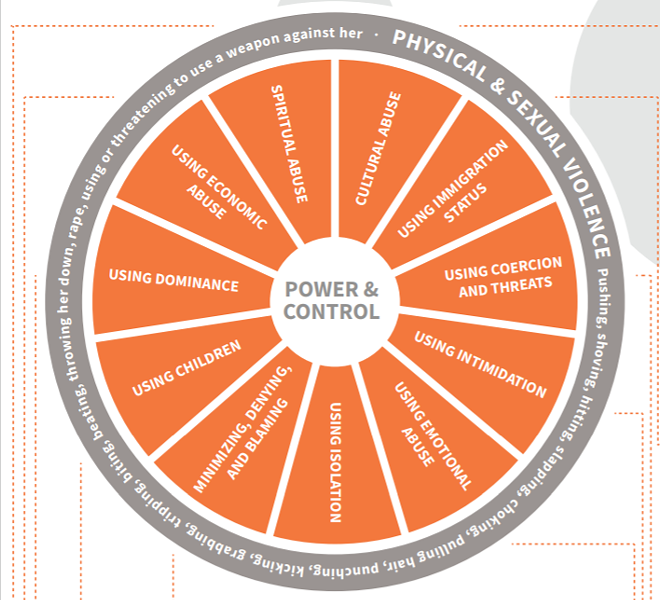 YWCA Spokane
The Wheel of Power and Control is a tool used by the YWCA to explain how domestic abusers try to control their victims.

A major focus of the YWCA Spokane is to help victims of domestic violence. After the
Inlander published a story about domestic violence allegations against community leader Phil Tyler, the YWCA sent out the following statement:


Every day, at YWCA Spokane, we work to assist women and children who are affected by domestic violence and abuse. This week, The Inlander published an article detailing domestic violence allegations about a member of our community, who has supported the YWCA Spokane publicly in the past. We find these allegations deeply disturbing, and stand with these and other victims who have spoken out so bravely.

The women who we assist come to us in pain, desperate for help but fearful of what that might mean. We listen to their stories, unique in the details but so similar in the themes of control, and explosive outbursts.

In The Inlander’s article we saw the same pattern, the same themes. And again, we are disheartened. This has to change. We ask the community to join us in our work to end the silence around domestic violence and to make a difference for our families and our community.

In writing this story, we spoke at length with Morgan Colburn, associate director of counseling and outreach with the YWCA Alternatives to Domestic Violence program to try to better understand this issue.

Here's what we learned:


While it's more common for men to abuse women, women can also be abusers. Same-sex relationships have domestic violence as well.

"It's really hard to determine a type of personality, each perpetrator will use these types of tactics differently," Colburn says.

For example, sometimes abusers may seem completely fine and loving until their partner gets pregnant. Then they become violent. Others may be abusive from the beginning.

One thing that many perpetrators have in common, however, is that they've often been victims or witnesses to domestic violence themselves. It's a cycle that can perpetuate.

There's also no reliable stereotype of a victim, she adds.

"We have clients in here who are upper-class professionals who are victims," Colburn says. "And people who are homeless."

One-fourth of women will be victims of domestic violence in their lifetime, according to the National Domestic Violence Hotline, and one in every seven men.

"When it’s one in four women, it’s our sisters, it’s our mothers, it’s our coworkers," Colburn says. You probably know people who have been victims, she says, even if you don't know it yet.


Domestic abuse is not just physical violence — it's about control

The YWCA uses a graphic called the "Wheel of Power and Control" to illustrate this idea.

"Everything they do is to seek power and control over another person," she says. "Not letting a victim have any access to a bank account... Sabotaging work relationships. Manipulating kids."

It's common for domestic abusers to isolate their victims from friends and family.

"Maybe turning family against the victim, or turning the victim against their family," Colburn says. After that happens, when the victim is scared, she may not know who she can turn to.

It's called "gaslighting," named after the 1938 film Gas Light, where a husband tries to convince his wife she's going crazy when she notices the gas lights dimming every night.  For example, Colburn says, an abuser might move his victim's car keys every night, and then accuse her of putting them in the fridge.

Doing little things like that is very common, she says.

"If a victim starts to believe are going to crazy, they start to disbelieve they’re a victim," Colburn says.


Just because a woman recants her allegations of domestic violence, that doesn't mean it didn't happen

But that doesn't mean she was lying, Colburn says.

"For the majority, that to recant the story is usually based off of safety concerns, not usually, 'this is a lie'," Colburn says. Often, victims are extremely hesitant to report their abuse to police, for a number of reasons.


"Why would she stay?" is the wrong question


Three years before the #MeToo movement, the video of NFL player Ray Rice punching his then-fiancee in an elevator sparked a #WhyIStayed hashtag centered around domestic violence. It's incredibly common for women to stay in an abusive relationship. Maybe they're worried about violent retaliation. Or their kids. Or that no one will love them again.

Many victims will also return to their abuser, Colburn says, but that shouldn't make you question their allegations of abuse either.

Sometimes abusers may threaten to kill themselves if victims don't return to them. Or they may promise to change, apologize for what they've done and charm their way back into their victim's good graces.

"We are all taught to feed into hope," she says. "We’re taught we’re supposed to believe people and help people to change."

Often, there's a cycle. Long periods of time may go by where the violence subsides and their relationship is good. And then the violence returns.


Abusers can change — but they have to come clean first

"I am a firm believer that anybody has the capacity to change," Colburn says. But first, they have to take responsibility and show accountability.

"I can’t change my eating if I don’t think I have an eating problem," Colburn says.

If they have admitted violence, it's often a matter of finding the right way to treat the problem. If childhood trauma is an issue, for example, that could mean going to therapy to address the trauma.

In fact, anger management can backfire, she says. Victims often rely on noticing signs of anger to escape from a situation that could turn violent.

"Anger management teaches people to control their anger, and reduces the victim's ability to perceive if they’re angry," Colburn says. "Now we’ve almost taught the perpetrator to hide the signs the victim needs to keep him or himself safe. "


Here's what you can do if you've been a victim


The YWCA has a number of resources to help you. First, you can call the YWCA Spokane 24-hour domestic violence help line at 509-326-2255. The calls are completely confidential, and you can get specific information to your situation about how to handle it.

Crucially, read these lists of recommendations about how to keep yourself safe. Make sure you have a plan for a place you can go in the event of violence. Have a plan for getting your children out safely.

Change the locks on your doors if your abuser lives outside the home. Tell trusted friends and neighbors about your situation.

Many cell phones have GPS devices that allow account owners to track your location. You might want to turn the GPS off if you suspect your abuser may be tracking you. Similarly, it might be safer to create a new email account at a public terminal at the library when communicating certain information.

It can be extremely dangerous to leave an abusive partner, the YWCA explains. Keep an extra set of keys, money and important documents in a safe place. Have a plan to escape at any time.