Framed for murder, no place to pump breastmilk, Trump says deportees are 'animals' and morning headlines 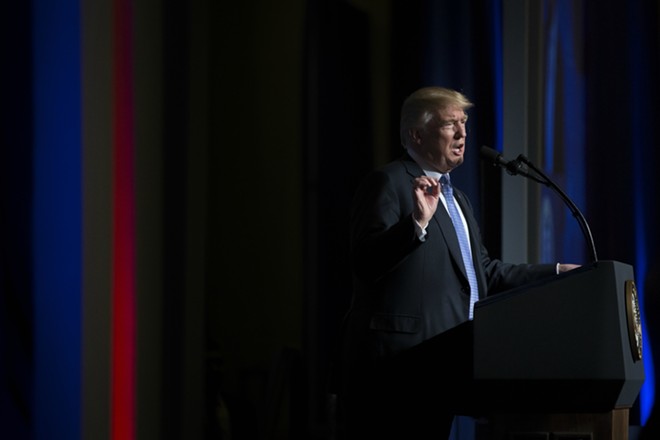 A place to pump
A mother is suing a Spokane judge for failing to provide adequate space to pump breastmilk.

Everybody poops
Advocates say there aren't enough public restrooms in the city, and that presents a problem for homeless people.

Portland to Liverpool to Granada and back
Portland singer-songwriter Moorea Masa will play the Bartlett this weekend. Music writer Howard Hardee talked to her about her journey to becoming a hit R&B singer.

Framed and awaiting a death sentence
A black man awaits execution in a California prison. He was convicted of the brutal 1983 murder of a white family living in an affluent neighborhood east of Los Angeles.

But witnesses say the attack was carried out by three white men, and brown or blond hairs were found clasped in the victims' hands. Police also apparently ignored other evidence pointing to a convicted murderer released from prison shortly before the attack.

Now, Gov. Jerry Brown is refusing to allow advanced DNA testing that could show once and for all if Cooper is guilty or innocent. After reviewing the evidence and trial transcripts, experts say Cooper was framed by crooked cops. (New York Times)

This is Aaron Schlossberg, Attorney at Law, known for racist rants all over NYC. Here is looses it because people have the audacity to speak Spanish in America and he assumes they are all on the "welfare he paid for" right before he threatens to call ICE. pic.twitter.com/uw1m9wczTl

No surprise here
During a roundtable discussion with California sheriff's, President Donald Trump referred to people being deported from the U.S. as "animals."

"We have people coming into the country, or trying to come in, and we're stopping a lot of them, but we're taking people out of the country. You wouldn't believe how bad these people are. These aren't people. These are animals," the president said. (The Hill)

Brown v Board and the judicial nominee who won't endorse it
Today is the 64th anniversary of the landmark Supreme Court decision to desegregate public education in the U.S. Today is also when the Senate Judiciary Committee will vote to confirm or reject Wendy Vitter, Trump's nominee for Louisiana district court judge.

In response to a direct question last month, Vitter refused to say whether she agreed with the court's decision in Brown v. Board of Education. (Medium via Vanita Gupta)

Idaho GOP primary victor Russ Fulcher thinks Trump is a jerk, but says he can speak his language