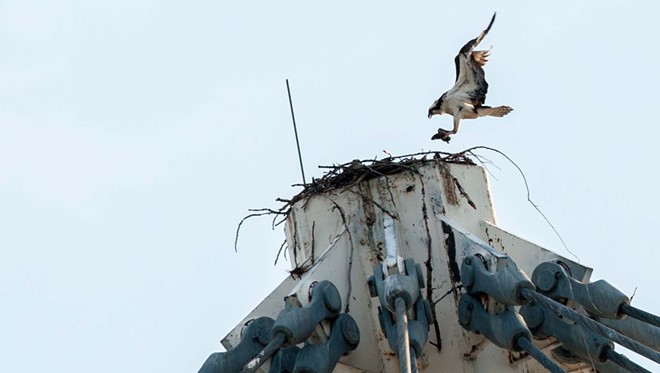 Daniel Walters photo
Say you're an osprey. Your ideal nesting site is a high-rise waterfront property with great views of a body of water teaming with fish.

So why not build your nest on perhaps the most iconic landmark of the Spokane skyline, Riverfront Park's U.S. Pavilion?

An osprey family has done just that.

Today, a Spokesman-Review article says that Garco, the company in charge of construction of the Pavilion, previously found a goose nest on the roof of a building near the Pavilion area, but hadn't run across any osprey nests.

That didn't sound right, because we had just taken a ton of photos of an osprey family doing its osprey thing on the top of the pavilion yesterday.

So we sent some of our photos to Carrie Lowe, assistant district wildlife biologist with the Washington Department of Fish and Wildlife, who confirmed there did indeed appear to be an osprey nest on the top of the Pavilion.

"I would say it looks to me like there’s a pair up there. It looks like an adult is bringing food into a nest,'" Lowe says. "Whether it was always an osprey nest, it is now... the young [osprey chick] probably would have hatched in the last couple of weeks."

Nesting season lasts from March 20 through September 1. Outside of that season, if a property owner wants to get rid of an osprey nest, they can seek a permit from Washington Fish and Wildlife, Lowe says. Then they can put up a platform or spikes to deter the osprey from nesting in the area.

It happens with cell phone companies all the time, she says.

During nesting season, however, you need to get a permission from the feds — the U.S. Department of Fish and Wildlife — to remove the nest. It's a lot riskier to evict an osprey while it's still nesting.

"You could be impacting the animal itself at that time," Lowe says. "Threatening the survival of the animal."

While osprey are no longer considered an endangered species, they are protected by the
Migratory Bird Treaty Act, Lowe says.

Theoretically, depending on the construction demands, the parks department could decide to let the osprey stay as a permanent tenant of the renovated Pavilion.

"Our construction manager is checking with Garco to see if the area will need to be disturbed at some point for maintenance," city of Spokane parks department spokeswoman Fianna Dickson says. "We are also calling the Washington Department of Fish and Wildlife for a consult and advice."

Osprey, after all, do just fine around people.

"Given the osprey nests that I see around Spokane, they don’t seem to care that much," Lowe says. "They’re fairly adaptable for people. If that’s a location they chose for a nest, they’re comfortable there." Daniel Walters photo
A least two flight capable osprey have been nesting at the top of the Pavilion right now, and they appear to be tending to at least one adorable baby osprey chick.

Daniel Walters photo
If you're patient, you can spot them swooping around the netting of the Pavilion.

Daniel Walters photo
One osprey likes to perch on the trees below the Pavilion to look for fish. 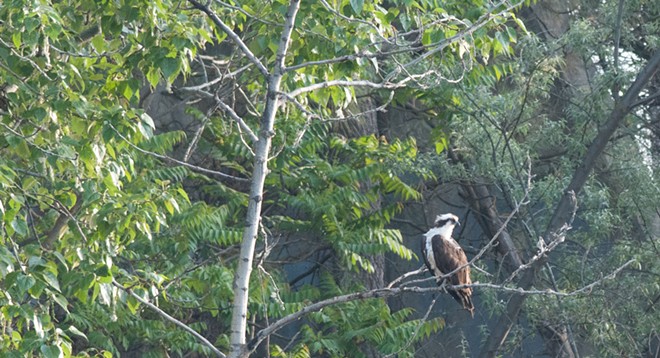 Occasionally, it will eat its catch while perched on a branch on the north side of the Spokane River. Daniel Walters photo
Crows and other birds also like to hang out in the Pavilion. Sometimes they have X-Wing vs. TIE Fighter style dogfights with the in the air. Daniel Walters photo
Yet the osprey might not even be the coolest animal to take up residence near Riverfront Park: While shooting these Osprey pictures, we also managed to catch a colony of beavers near a beaver dam below the Red Lion Hotel.

The trees stand no chance.