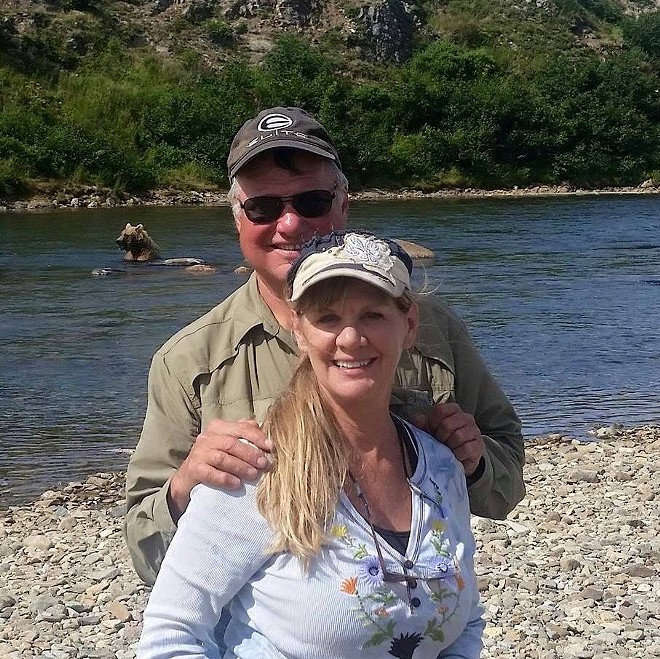 Larry and Lori Isenberg in a photo posted to Larry's Facebook in 2015.

Coeur d'Alene Police reports recently released to the Inlander give more details about the inner workings of the nonprofit North Idaho Housing Coalition (NIHC) where Lori Isenberg worked as the executive director.

Isenberg is currently facing charges in Kootenai County for embezzling about half a million dollars from the nonprofit that buys and rehabilitates homes and resells or rents them to low and moderate-income buyers. Since her arrest in February, she has skipped two court appearances, and there is now a $500,000 warrant for her arrest.

Police interviews with two people in particular, NIHC President Kerri Thoreson and Treasurer Kevin Vedder, illuminate Isenberg's history with the NIHC and the level of trust the organization's board put in her.

"You look back and why did we give her so much authority or power," Vedder tells police. "Such a lack of oversight."

Both Thoreson and Vedder say they've known Isenberg for a long time, and neither would have suspected that she would steal from the organization. In fact, up until she was made aware of Isenberg's crimes, Thoreson says she would have given Isenberg a "glowing review." Isenberg has admitted to police that she stole money from NIHC.

To police, and in a follow-up conversation with the Inlander, Thoreson emphasizes that Isenberg did not have the authority to sign checks (investigators found numerous checks with forged signatures) and was not the nonprofit's accountant.

Generally, Isenberg's responsibilities, Vedder tells police, were to secure grant funding, find houses for the organization to purchase and rehab, execute the purchase and sale agreement, obtain a check from NIHC's contracted accountant and verify the work when the house was completed.

The organization had no official policies laying out responsibilities, salary or authority for Isenberg's position, Vedder tells police. "They, the board, just allowed Lori to continue doing what she was doing since they were getting 'lots of good press' and the organization was fully immersed in making affordable housing," according to the police report.

It was within the 18 months preceding her termination, when the board agreed to bring the accounting and contracting functions in-house at Isenberg's suggestion, that the alleged crimes took place, including payments to "ghost companies" Isenberg had set up in her name and her daughter's name.

Isenberg has admitted to police that she stole money from NIHC, but gave it to her daughters for "medical expenses," though Thoreson notes that those statements have not been verified.
At the same time Coeur d'Alene Police were investigating her alleged financial crimes, Isenberg's husband, Larry, ended up in Lake Coeur d'Alene while the couple were on an early morning boat ride in February. His body was found March 1, and the investigation into his death is still ongoing, according to Kootenai County Sheriff's Office Detective Dennis Stinebaugh, who would not say whether Isenberg was under investigation for her husband's death.

Moving forward, Thoreson says, NIHC is close to hiring an interim director to help "right the ship" and provide recommendations for what authority and responsibility should be given to the permanent director, as well as how the board should oversee the position.

"I don't know that there's a bright side to this story," Thoreson says. "But we definitely are taking very seriously our responsibility to the organization."

NIHC is largely funded through federal grants. Thoreson says she is unsure whether this ordeal will put future grant applications in jeopardy, though she is hopeful the nonprofit can continue to receive those funds.

"Speaking for the board, we want her to have her day in court," Thoreson says. "It's an important part of the process, and it's incredibly frustrating that she has failed to show up. I'm hoping we will have the opportunity of having her appear in court sooner rather than later."

Rainy, but not gloomy, Spokane Pride Parade draws a crowd in spite of the weather