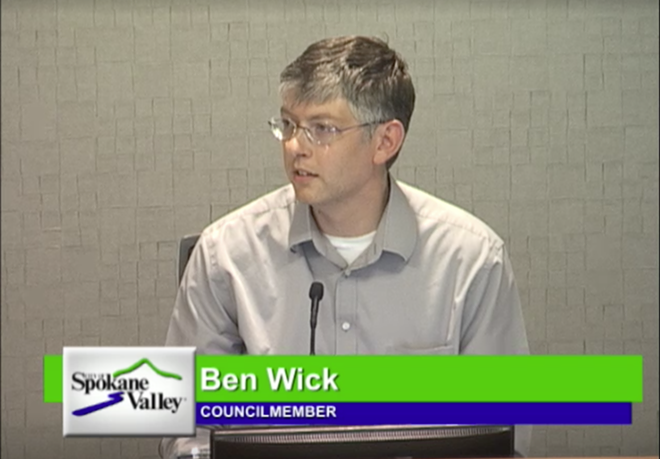 Ben Wick was caught off guard when Mayor Rod Higgins proposed kicking Wick off the SRTC board.

Near the end of the most recent Spokane Valley City Council meeting on Tuesday, Mayor Rod Higgins decided he wanted to shake things up.

Though it was not on the agenda, Higgins made a motion to change the committee assignments for several council members.

The biggest change? Moving Councilman Ben Wick off of the Spokane Regional Transportation Council Board of Directors.

The motion passed in a 4-3 vote. And Wick, who was vice chairman of the SRTC, is still trying to figure out what he did to warrant such a move from the mayor.

"This is new to me," Wick said. "I guess I wish I had a little bit more of an understanding of what was happening to cause my removal."

Wick wasn't the only one taken aback by the move. Councilwomen Brandi Peetz and Linda Thompson also expressed confusion.

"I don't understand what the removal would be for," Peetz said.

But Higgins did not explain it. Neither did council members Arne Woodard, Sam Wood or Pam Haley, all of whom voted in favor of the committee reassignments. Woodard argued the mayor had no obligation to explain himself.

"He really doesn't have to give reasons," Woodard said. "Call it a gut feeling, if you will. Or he just had a bad apple today, or whatever it is. It doesn't really matter what the reasons are."

Wick served on the SRTC board before as chairman, during his previous stint as a Spokane Valley City Council member. He was on the citizen's advisory board for SRTC even when he wasn't a council member. Next week, he was planning on filling in as chair of the meeting because Al French, normally the chairman, was away.
"I'm sorry if I've done something to make it seem like I'm not a team player," Wick said Tuesday.
Reached by phone Friday, Wick still was at a loss to describe why he was taken off the SRTC. But he suspects it had little to do with the SRTC itself.

"I think it was just a punishment," Wick says. "But I'm not sure what for."

He does have his suspicions. He thought it may have had something to do with an article that ran in The Current, a Spokane Valley newspaper that Wick owns and publishes. Recently, the paper ran an article — not written by Wick — that city staff argued misstated its position on how the Mullan Trail Marker had been damaged.

Mayor Higgins, when reached by the Inlander Friday, didn't go into specifics on why Wick was taken off the SRTC. But he did suggest there were other factors at play.

"This has very little to do with the SRTC," Higgins says.

He described it as a "cumulative effect." The article in The Current was one reason for the decision, but not the only one.

"This was coming regardless," Higgins says.

Ideologically, the council is somewhat divided. Higgins, Woodard, Wood and, to a lesser extent, Haley, are further right than the other councilmembers. Appointing Wick to the SRTC, Higgins says, was an "olive branch" offered following the election. But Wick, Higgins says, has remained part of the "loyal opposition" on the council.

Even though it was never on the council agenda, Higgins says the move "was not intended to be a surprise."

The only people who did not seem surprised by the move were the other three council members who voted with Higgins. But Higgins strongly denies any meeting that would have violated open meetings laws. ("Hell no," he says.)

Wick says the move is concerning for Spokane Valley. Woodard, who is taking Wick's seat on the SRTC, can't take Wick's position as vice chair. And Wick says Woodard hasn't been part of the same conversation within the SRTC as Wick has.

"I think citizens of Spokane Valley are getting the short end of the stick," Wick says.