Paper File? eFile? Fine for some. This tax season, though, we suggest you Burrito File. 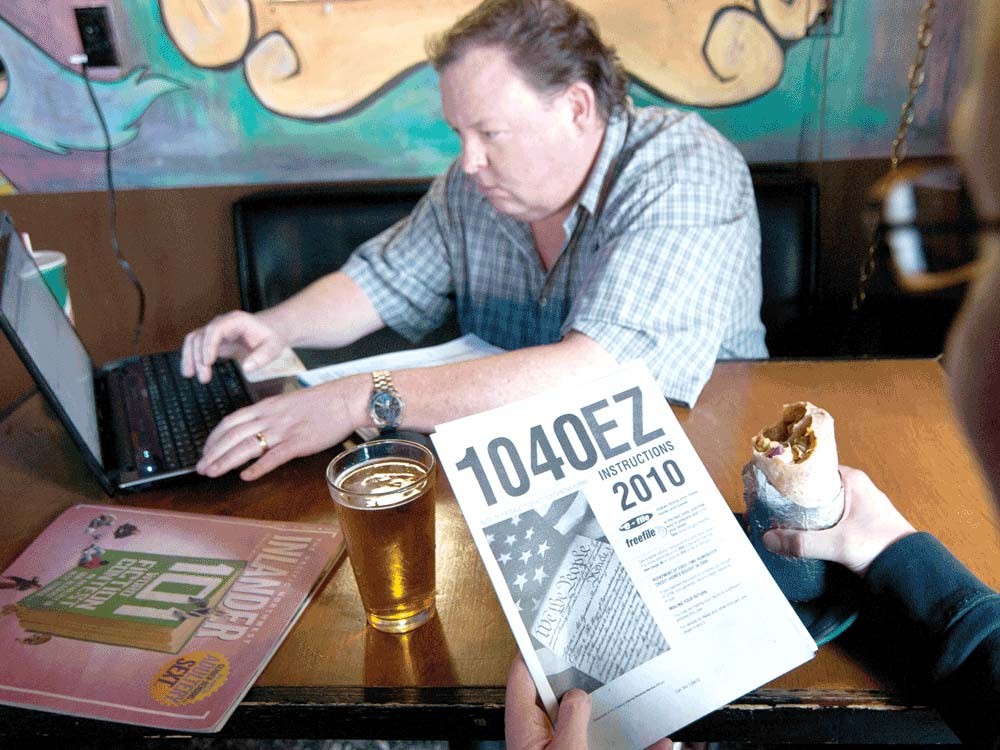 Joseph Stalin, standing at least 10 times taller than a Russian tank, gazes sternly to the west. A red flag bearing the coat of arms of the Soviet Union flaps resolutely behind him.

Finally, the order comes. Pointing in the direction of the marauders, Comrade Stalin commands: “Have your taxes prepared at Neato Burrito!!” He says this with two exclamation points, so that you know he means business.

Taxes are boring, so you might as well get drunk. This, generally speaking, is the idea behind Dan Johnson’s decision to set up tax services at Neato Burrito.

He would know. Nicknamed “Dan the Tax Man” by Neato Burrito staff, Johnson has been boring people to death with taxes for 20 years, since he started helping out at his father’s Deer Park-area firm, F.A.C.T. Business Services.

The drill at the average CPA firm is this: You walk in, you drop a stack of paperwork and receipts, then you sit there, across the table from some guy at a computer. The first part has a degree of interactivity. There are some introductory questions. Name. Phone number. Marriage status.

The rest, though, is just staring. “I pity the poor customers,” Johnson says. “They’re sitting there, waiting for the paint to peel.” Half the time you’ve forgotten something. So you have to leave, come back.

While you, tax-paying American — with your spouse and your two-point-whatever dependents and your upside-down mortgage and that boat you probably shouldn’t have bought with that last quarterly bonus before the collapse — may be tied to your accountant, there’s no reason your accountant need be tied to his drab office. Technology is an amazing thing. Laptops. Wireless. “I can do this anywhere,” Johnson says. It might as well be a popular night spot.

On Neato Burrito’s south wall is a lonely little booth that no one ever sits in unless the place is packed, or the person is a groupie for whomever is at the microphone. Since W-2s started rolling in, this has been Dan the Tax Man’s desk.

During the past two decades, his father’s business did pretty well north of Spokane. “Deer Park is a small market,” Johnson says. “We have one-third of it.” Pretty much critical mass.

“I wanted to add another channel to [our] marketing,” Johnson says. The standard stuff, “fliers, newspaper ads,” gets you the standard kind of client. So Johnson thought printing his tax information on a piece of Soviet propaganda would be compelling to his target market, “people who might like Soviet propaganda.”

Well, more broadly speaking: “People who might have gone to school,” he says, “people who have an interest in history, like I do.”

He considered using a poster of Uncle Sam, but thought that would be a little too on the nose. “People see Uncle Sam and they get, like, ehh,” he says, waving his hands.

He picked Neato Burrito for the same reason he picked the former Soviet leader: to court a type of taxpayer he couldn’t reach back in Deer Park. “Younger people. Fiftyfifty male/female. People whose average return is about $100.”

Not landed gentry, but smart, like-minded young people with prospects. People you grow a business with.

Dan the Tax Man fixed my tax return in the time it took me to eat a barbecue burrito and drink a pint of Olympia.

I had done mine online already, but then my W-2 changed, so it needed to be amended. In about 20 minutes, I said goodbye to Johnson with a corrected 1040X and a full stomach for under $35 — roughly what I had paid to hrblock.com, and Johnson found $200 the website missed.

The Stalin poster says Johnson is there Monday, Tuesday and Thursday nights, but he has since switched to seeing clients by appointment only. “I don’t just sit down here for hours,” he says.

Uh, speak for yourself, pal.

How Democrats stopped worrying and learned to love taxing the rich