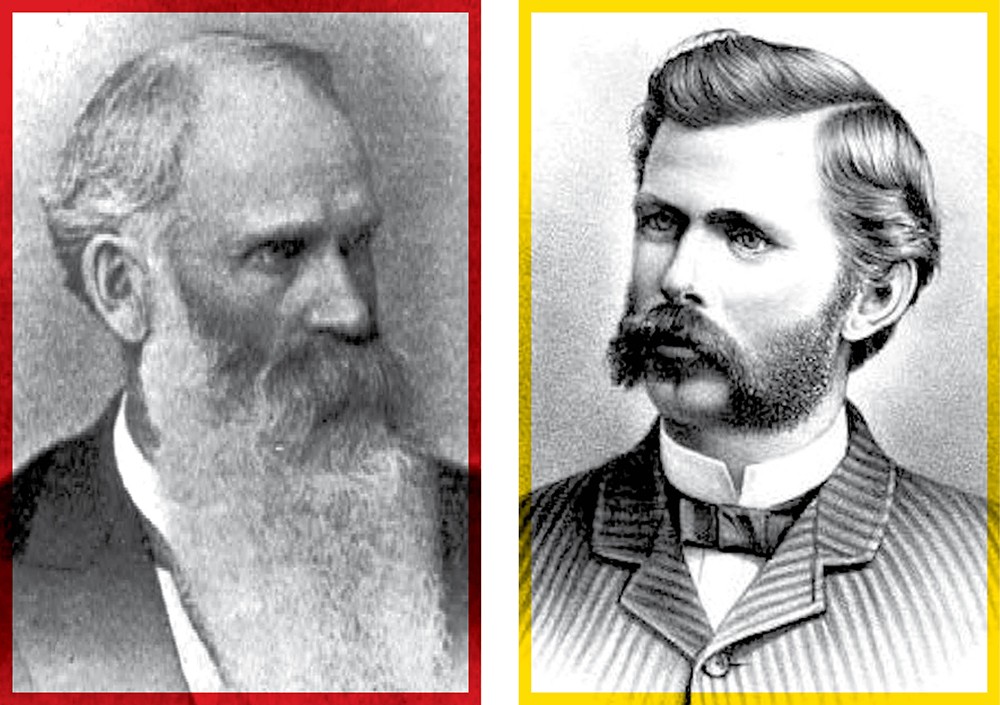 Anthony Cannon (left) and Francis Cook have differing views on their spat.

Newspaper editor Francis Cook stares down the barrel of two revolvers on the second floor of the Spokan Times offices. Cook's armed only with an iron typesetting tool. Cook's wife, with her infant nearby, pleads for her husband's life.

Sign a retraction, or die, his assailants tell him.

All this over the spelling of a name.

Maybe the sensible thing to do would have been to sign the paper. Don't bring printing tools to a gunfight, the old saying goes. But even by the standards of the Spokane frontier, Francis Cook is a stubborn man. And Cook hates few men more than Anthony Cannon, a banker and developer, who, along with real-estate magnate James Glover, launched a rival newspaper — the Spokane Chronicle. The newspapers lob insults and invective at each other.

But the feud may have just remained at a simmer had Cook not misspelled Cannon's name "McCannon."

Cannon sees this as as a grave insult, storms over to Cook's office with his son-in-law, Branscomb Bennett, and both men point their guns at Cook.

But just when it looks like Bennett's about to fire, Cook springs into action, snatching up a second iron printer tool, and knocks the pistols out of one man's hands — and then the other's. Bennett scrambles to retrieve his gun, only to receive a blow from Cook.

That's when Cannon, whose found his pistol again, aims at Cook. Cook slings an object across the room at Cannon, and Cannon's shot goes wide, the bullet blasting through the stovepipe and ricocheting to the ceiling.

Chaos follows. The fight devolves into a frenzied melee, spraying blood and scattering type everywhere. When the combatants spill out into street, Cannon once again tells Cook he's going to kill him. But not then. There are too many witnesses. Cannon and Bennett stumble away with major head wounds.

As for Cook? Well, Cook's just tired. Fighting off two men with guns will do that to you.

At least, that's the version Cook wrote in his newspaper. Other accounts make Cook look a little bit less like Jackie Chan and more like an asshole. Like say, the version in the Chronicle.

In that version, Cook threatens the two men before they draw their pistols. And then he hits them when their guard is down, beating the hell out of them.

Cannon only fires in self-defense. Cook begs with Cannon not to kill him, promising he'd retract anything he'd ever written about him, and the merciful Cannon lets him live.

So which one is true?

"Who knows what actually happened," says Doris Woodard, the 90-year-old author of The Indomitable Francis Cook. "I can't help but feel that Francis Cook exaggerated. ... I'm sure there were rights and wrongs on both sides."

Both Bennett and Cannon were arrested on charges of attempted murder. But the grand jury refused to indict them. The lead juror? Cannon's ally James Glover.

"A GRAND FARCE," thunders the Spokan Times in reaction.

The original print version of this article was headlined "1882 CANTANKEROUS COOK FENDS OFF EXPLOSIVE CANNON!"