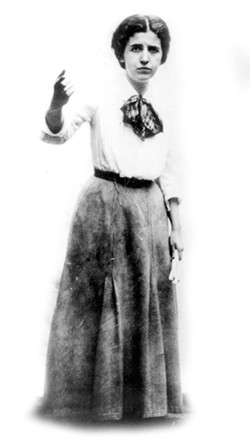 A free speech battle in Spokane was just the beginning

for the woman who'd eventually help found the American Civil Liberties Union (in 1920), and become leader of the U.S. Communist Party (in 1961). The famous and fiery Elizabeth Gurley Flynn began traveling around the U.S. in 1907 as an organizer for the socialist group Industrial Workers of the World, passionately imploring the oppressed working class to join her in the fight for their due rights.

Soon after, Flynn's calling would bring her to Spokane, where she would not only lead the charge of protest, but help uncover unjust treatment and behavior by the city's law enforcement.

In 1909, life in the young city of Spokane was tough for many; perhaps especially so for the town's "floaters," transient laborers who went from job to job just to get by.

What was even worse for the floaters? The "sharks" who preyed upon them under the guise of a job. These Spokane-based labor agencies would find you one, yes, but you'd have to pay a hefty price first — up to a dollar (that's more than $25 today). Even so, many workers found no work when they showed up to a job site, or were dismissed days later. Then the whole process would start all over again.

When word of this cyclical scam was picked up by the Chicago-based IWW, colloquially known as the Wobblies, Flynn and her fellow activists declared war. IWW members orated on the streets to working class crowds, protesting the ills foisted upon them by the employment offices.

The sharks bit back, though, successfully urging the city of Spokane to pass an ordinance banning any public speaking on downtown streets — except by the Salvation Army — a decision that was a clear violation of the First Amendment's right to free speech.

On Nov. 2, 1909, Spokane IWW members organized a peaceful protest of the ordinance by speaking atop soapboxes, with the intent of being arrested and thus overfilling the jail. What they experienced in the slammer was yet another outrage.

Conditions and the treatment of prisoners was despicable. More than 20 protesters were packed into 6-foot-by-8-foot cells, called "sweat boxes," where they often passed out or became feverish from the heat. "Human Bedlam in the City Bastille" proclaimed the front page of the Nov. 4 Spokane Press. Men and women — and even a few boys who ended up being arrested for their IWW associations — were beaten and nearly starved by police.

Not long after arriving in the city to aid the movement, Spokane police arrested the 19-year-old Flynn on charges of conspiracy for inciting violations of the city's public speaking ban. The Wobbly leader spent one night inside the jail, in a shared cell with two other women arrested on separate charges. Though the women were kind to Flynn, herself a feminist, she was shocked that one of them was escorted in the middle of the night by jail staff to visit men on a floor below. Flynn very publicly accused the jail of being a "municipal brothel" for the police in the Dec. 10 edition of the Wobblies' Spokane-based newspaper, the Industrial Worker.

The cops cracked down, attempting to seize and destroy all copies of that issue before distribution. Reportedly, only eight copies of the issue were saved, and no apparent record of that edition's contents have been recovered.

While Flynn's accusations of a jail-run brothel were never proved nor disproved, the animosity between the free speech protesters — and the IWW in general — and local law enforcement ran deep. In the following week's Industrial Worker issue on Dec. 15, Flynn recounted her horror in a furious manifesto, "Story of My Arrest and Imprisonment":

"The whole performance bore the earmarks to me of a putrid state of morals inside the county jail of Spokane. Taking a woman prisoner out of her cell at the dead hours of night several times to visit sweethearts looked to me as if she were practicing her profession inside of jail as well as out!" she wrote.

The Wobblies eventually prevailed in their hard-won free speech fight, when in March of 1910, the city overturned the public speaking ban. Not long after, the city also told the labor sharks to get out of town.