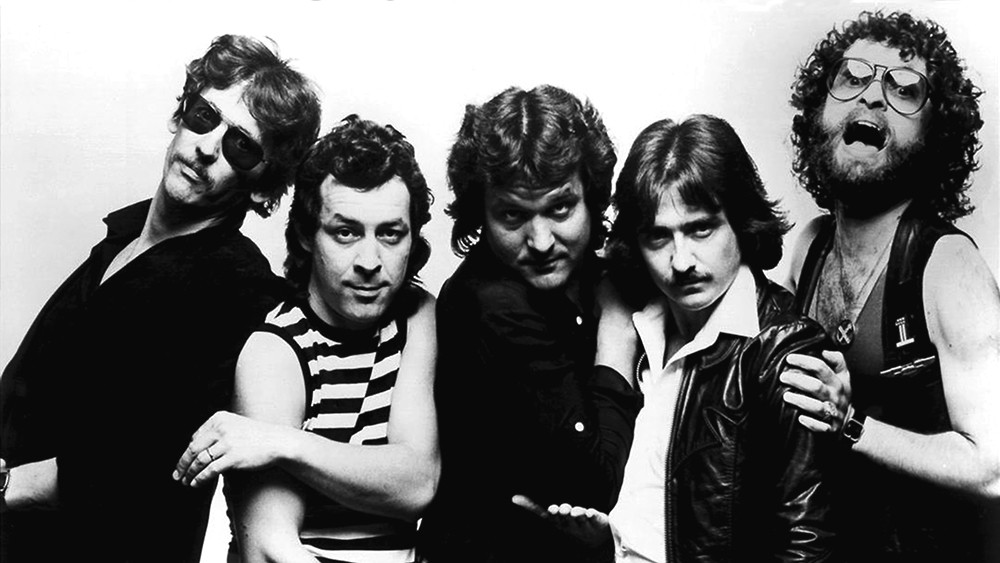 Blue Oyster Cult, as they may have looked in 1976.

but in State Line, Idaho, and with actual fire.

The three-day "Nor'Wester '76" festival was supposed to feature headliners like Bachman-Turner-Overdrive and Blue Oyster Cult. But everything started going wrong from the beginning. The festival was in debt. The first night's opening had been delayed for five hours because of lack of payment. Bachman-Turner-Overdrive refused to fly in from Vancouver, B.C., after learning they probably wouldn't get paid.

And when a big piece of equipment fell off a forklift and onto a crew member — breaking his leg — the sound and light crew called it quits, deciding to pack up. And that sparked a riot.

While only a fraction of the crowd of nearly 7,000 rioted, others cheered them on.

Five concessions stands burned, and thousands of pounds of beef and 600 cases of beer were looted. Propane and diesel trucks blew up, sending gouts of flame shooting 50 feet into the air. Rioters pushed a dairy truck over the grandstands, and then set it on fire. Cars and motorcycles tore recklessly through the infield. A huge crane backstage was toppled and set ablaze. Six people were hospitalized — though one merely from a drug overdose. The eight-foot-high plywood fence was burned and looted.

"The speedway literally looked like a battlefield during the height of the riot," Spokesman-Review reporter Les Blumenthal wrote.

Security could have stopped the riot — but the security hadn't been paid either. They left a half-hour before the chaos started.

"I don't think we'll be having any more of these in this part of Idaho," Kootenai County Sheriff Thor Fladwed told the Review.

The original print version of this article was headlined "1976 NOR'WESTER FESTIVAL GETS LIT!"