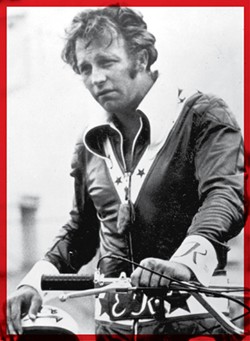 It's a Monday night in downtown Spokane,

and Evel Knievel is just minding his own business with some female company at the Ridpath Hotel.

Suddenly, Clarence "Cip" Paulsen bursts through the door, sees Knievel with his ex-girlfriend, and then beats the crap out of the 56-year-old stuntman. He only relents when Knievel pulls a gun.

Knievel, who once tried to jump the Snake River Canyon on a rocket-powered motorcycle (and failed), later claims this fight scared him "half to death." He sues the hotel for millions, claiming the hotel clerk wrongly gave his key out.

But, if you ask Paulsen, who now owns a legal marijuana grow operation in Spokane, that's not how it went down at all.

"I just laughed. I mean, are you kidding me?" Paulsen says of hearing Knievel's claims. "The guy was a showman. He was a scammer."

As Paulsen tells it, the two buddies had been drinking for hours across the street. Knievel told the front desk to give Paulsen his room key and asked Paulsen to come wake him up from a nap later.

When he went up to the room, Paulsen found Knievel with his buddy's girlfriend. She worried Paulsen would rat them out, and Evel told him to get out.

That's it. No punches. No gun. No fight.

In fact, Paulsen says, they met up later at the Baby Bar to drink more.

The case, he says, was a sham.

But by the time the case went to court in 1995, Paulsen had been caught and put in jail for taking part in a major cocaine ring in Spokane. Neither seemed like a reliable storyteller.

Still, the late Knievel was awarded about $51,000 from the hotel, for an invasion of privacy.

The original print version of this article was headlined "1989 TRIUMPH OF EVEL!"