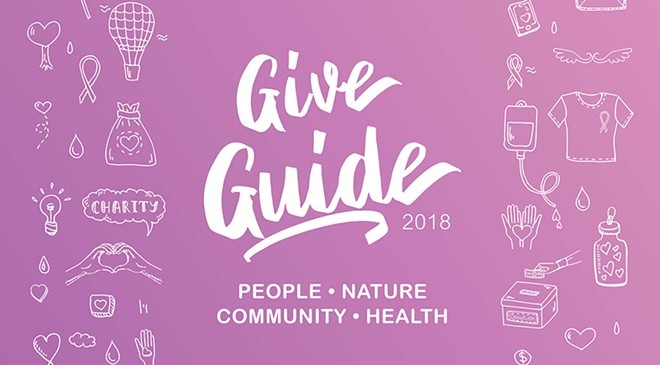 The Inlander's 2018 Give Guide artwork
To start this decade, the Inlander decided to do something a little bit different: Formally recognize the individuals working the hardest to make the Inland Northwest a better place.

We called it the Peirone Prize, a philanthropy award named after Inlander owners Ted and Jer McGregor's grandparents, Joe and Alice Peirone. And this year is a little bit special, as it's the 10th year of the award.

That means it's time for some nominations! Know anyone working tirelessly in the nonprofit sector and having a positive impact with animals or in the arts, social justice, youth, education, the environment, wellness/nutrition or other areas? Send them our way.

Submit nominations at Inlander.com/give2019. All nominations must be submitted by Friday, Aug. 2. We know people of all backgrounds and ages work selflessly, but we're typically looking for individuals younger than 40(ish).

We'll narrow down the nominations to choose a few winners who will be featured in our annual philanthropy issue, the Give Guide, which will be on stands Aug. 22. Winners of the Peirone Prize will receive a cash award as our thanks to them for their work in the community.

For your inspiration, here are the winners of recent years.

2017
Rosemary Wear, a young Spokane attorney who uses her legal know-how to help people in need get access to disability assistance payments and other support.
Jamie McAtee, who founded the nonprofit animal rescue Rescue4All to help at-risk and special needs pets, who are fostered by local volunteers before being placed into loving homes.
Drew Meuer, Second Harvest's chief development officer, who’s working to end food insecurity in Spokane.

2016
Teri Koski, president of NAMI Spokane, who often references her own struggles with mental health to show others they're not alone. Dylan Stiegemeier, a local conservation enthusiast, whose efforts have spread worldwide.
Ryan Oelrich, who helps local at-risk kids and homeless families.