Orion Pictures
Jodie Foster won an Oscar for The Silence of the Lambs, as did Anthony Hopkins.

It must have been some kind of sick joke to release The Silence of the Lambs on Valentine’s Day 1991. February is normally the month when studios dump their least desirable products, but this bloody thriller had quite a pedigree: It was directed by the critically adored Jonathan Demme, based on a bestseller by Thomas Harris, and starred recent Oscar winner Jodie Foster as an FBI trainee who uses one serial killer to catch another.

The film was an instant hit, topping the box office for five straight weeks and remaining in the top 10 well into the spring. The Silence of the Lambs became only the third movie to sweep the so-called “top five” Academy Awards categories — best picture, director, actor, actress and screenplay (It Happened One Night and One Flew Over the Cuckoo’s Nest are the others).

Demme’s attachment to such gruesome material is bizarre in retrospect. He was best known for mostly upbeat, off-kilter films: the Talking Heads concert film Stop Making Sense, quirky buddy comedy Melvin & Howard, the studio-compromised WWII romance Swing Shift. Although he got his start making down-and-dirty exploitation films for Roger Corman, and although some of his movies — particularly 1986’s Something Wild and 1988’s Married to the Mob — had a glimmer of menace about them, nothing Demme had made suggested he’d be a match for something so grisly.

But the late director’s trademark sense of character is all over Silence of the Lambs, and what separates this film from its copycats is its predilection for humanity over horror — in fact, the authenticity of its central characters is why the horror is so potent.

Consider the famous meetings between Agent Clarice Starling (Foster) and the imprisoned Hannibal “The Cannibal” Lecter (Anthony Hopkins), who appears to have insight into a string of brutal murders credited to one Buffalo Bill (Ted Levine). Starling and Lecter only share four short scenes in the movie, and yet those scenes have embedded themselves so deeply into our cultural consciousness that we tend to forget how little time they occupy.

Hopkins himself is only in the film for about 25 minutes, and yet his performance, one of the scariest ever captured on film, looms over the movie like a bird of prey, always circling. He seems almost sprightly, maybe even a bit debonair, until he turns on his heel and bites your nose off. Hopkins’ interpretation of Lecter is rightfully iconic, and yet it’s as good as it is because he has Foster to work against. Hopkins’ performance has inspired the most critical analysis, but Foster’s role is the richer and more difficult. She has to play convincingly tough and convincingly vulnerable, a brilliant investigative mind nonetheless second-guessed by her superiors at every turn. The moment when Clarice breaks down crying after her first meeting with Lecter doesn’t read as a moment of weakness, but rather as a moment of understandable human catharsis. She’s the emotional and dramatic anchor of the film, and without Clarice’s humanity, Lecter’s single-minded bloodlust isn’t half as threatening. 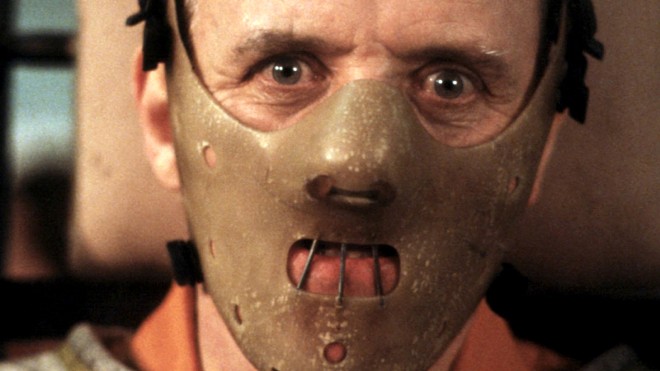 Orion Pictures
Hannibal "The Cannibal" Lecter is one of film's scariest presences.

The Silence of the Lambs wasn’t the first Hannibal Lecter novel to make it to the screen. Five years prior, Michael Mann adapted Harris’ 1981 potboiler Red Dragon as Manhunter, in which retired homicide detective Will Graham (William Petersen), damaged from a long-ago run-in with Lecter (Brian Cox), reluctantly takes the case of a mass murderer known as the Tooth Fairy (Tom Noonan).

Placing Manhunter side-by-side with Lambs is an interesting case study in seemingly contradictory styles being applied to similar material. Both films follow more or less the same trajectory — killer strikes, cop investigates, Lecter mediates, killer and cop face off — and yet they couldn’t look more different.

Mann’s approach is as moody and neon-lit as his then-popular TV series Miami Vice, and the sets are sparsely furnished, ultramodern and almost clinical in their cleanliness. Demme’s, on the other hand, is gothic and baroque, and his milieu is practically subterranean: The antiseptic white tile of Lecter’s jail cell in Manhunter is replaced here by a dungeon-like chamber, and Clarice’s first visit to the cavernous bowels of the prison foreshadows her climactic descent to Buffalo Bill’s lair, where the kidnapped Catherine Martin (Brooke Smith) is trapped in an empty well embedded even deeper into the earth.

Those warring visual styles also reflect the motives of their respective villains. Manhunter is about a killer who spies and lurks before pouncing, and Dante Spinotti’s camera follows suit, often hanging back and shooting its characters through long lenses. Lambs’ killers, meanwhile, grab and bite and peel back flesh, and the movie likewise invades our personal space with its leering camerawork. I don’t think either approach is designed to let the audience identify with murderers, but rather to get us in the same headspace as their central detectives, who are themselves occupying the damaged psyches of the killers they hunt.

Much has been written about cinematographer Tak Fujimoto’s use of close-ups in The Silence of the Lambs, and what struck me upon this rewatch is just how close they are — suffocating, leering, invasive — and how they’re almost always employed whenever Starling is in conversations with men, whose demeanors range from formal to condescending to menacing. Demme has them stare directly down the barrel of the camera, practically breaking the fourth wall; in her close-ups, Starling’s eyes are usually pointed right past the lens, as if she’s trying to escape such unwanted scrutiny.

And yet she’s trapped by their gaze, like a moth pinned to a board.

In 1991, the acclaim for Silence was deafening, but it wasn’t without its critics. The character of Buffalo Bill, in particular, was singled out by contemporary LGBTQ+ advocates as yet another Hollywood film dangerously conflating gender fluidity with murderous psychosis. The activist group Queer Nation even protested outside the ’92 Oscars ceremony. The criticisms ring even truer three decades later, and other writers have delved into them more eloquently than I ever could: For starters, I’d recommend Annaliese Griffin’s 2019 essay about Buffalo Bill for Quartz, as well as Jo Moses’ recent contextual analysis for the student-run publication the Campanil; both pieces recognize the artistic merit of the film while rightfully singling out its most troubling undercurrents.

It was a successful, award-winning, incendiary film, which meant one thing: There had to be sequels. Hannibal, directed by Ridley Scott and released a decade after its predecessor, took the Lecter-Starling relationship in dunderheaded directions and leaned into Grand Guignol camp — remember Anthony Hopkins feeding Ray Liotta sauteed chunks of his own brain? 2002’s Red Dragon, another adaptation of the first Lecter novel, is more operatic than Manhunter and yet less absorbing. And the Lecter origin story Hannibal Rising, released in 2007, is essentially forgotten.

Improbably enough, it was the character’s transition to network television that finally brought him back to the heights of Silence of the Lambs. NBC’s Hannibal, a prequel series starring Mads Mikkelsen as Lecter and Hugh Dancy as Will Graham, got mostly middling ratings but glowing critical reviews, and it’s a gorgeous, twisty, surprisingly nasty bit of serialized drama. The reason it works is that Bryan Fuller, who developed Hannibal for TV, understands Lecter’s allure better than any filmmaker since Demme, which is that he’s only compelling when he’s up against someone as equally and lethally intelligent.

It’s also why Clarice Starling is still the best sparring partner Hannibal Lecter ever had. (Another TV spinoff, titled Clarice, follows Starling in the aftermath of her time with Lecter and debuts on CBS on Feb. 11.) In those underground interrogations, she attempts to grill Lecter at an emotional remove, before realizing that she has to succumb to his mind games in order to recover the information she needs. Lecter, to give a psychopath credit, is also aware of Starling’s motives, and rewards her for humoring him. It isn’t the case of a fly being coaxed into a spider’s web. In so many ways, they’re playing each other.