Last Saturday, Gonzaga men’s basketball team publicly kicked off their 2021-22 season with Kraziness in the Kennel at McCarthy Athletic Center. Here are five takeaways from the action on and off the court.

1. RETURN OF THE MAC

For the first time since February 2020, the arena was packed for Kraziness in the Kennel.

As a former Zag, feeling the energy, seeing the stomping for “Zombie Nation,” and hearing the chants felt like the familiar warmth of home. But it also dawned on me that for many, this was their first time in this environment. There are sophomores at Gonzaga – both in the stands and on the team – that had yet to experience being in the Kennel, and must’ve been soaking in the bliss of it all.

The combination of first timers finally getting a chance and old heads finally being back led to an absolutely electric atmosphere for the whole afternoon. Time away isn’t going to dampen one of the best home court advantages in the country.

(Having a vaccine requirement for the MAC this season certainly adds to feeling more comfortable and communal in a crammed Kennel, though the “required” mask wearing clearly isn’t going to be enforced in any way as well over half the crowd and probably 75 percent of the student section ditched their masks once in their seats. Here’s to hoping Gonzaga games don’t lead to a rash of breakthrough COVID cases.) 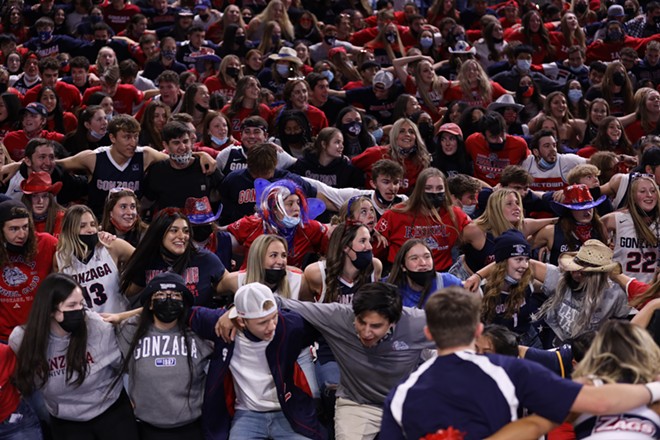 Gonzaga Athletics photo
The Kennel Club is back.

Julian Stawther is a bucket.

I bought up all the fandom stock I could in Strawther after he put up 22 points per game while playing for Puerto Rico in the FIBA Under 19 World Cup in 2019 (finishing as the second highest scorer in the tournament, finishing ahead of fellow Zags Jalen Suggs, Joel Ayayi, Filip Petrusev, Omar Ballo, and Marynas Arlauskas and future NBA players like Cade Cunningham, Jalen Green, and Tyrese Haliburton). So far, that’s looking like purchasing Amazon stock when all they did was sell books online.

My hot take? He could be the second best scoring option the Zags have this season, behind only returning All-American Drew Timme. Yes, I’m even placing him above No. 1 recruit and potential No. 1 NBA pick Chet Holmgren when it comes to pure scoring (Holmgren’s shot was off during the scrimmage, but he’ll be fine and will be a defensive force shot blocking regardless).

The question is simple: Will Strawther get the playing time? It seems unlikely that he’ll be a starter. Timme, Holmgren, and point guard Andrew Nembhard are stone cold locks to start, leaving two wing/guard spots open. Junior forward Anton Watson – who has started on and off for two seasons — is as close to a lock without being a lock as possible for one of those slots (unless Mark Few figures that's too much size), and it seems likely that incoming five-star recruit Hunter Sallis or transfer Rasir Bolton would slide into a second guard slot alongside Nembhard (or maybe the both start if Watson is in the sixth man role).

That would likely leave Strawther as a killer scoring option off the bench. Which isn’t a bad thing!

That said, if Strawther continues to show out like he did on Saturday, it will be hard to keep him in the pine for very long.

The best part of Kraziness is always making quick overreactions to the new guys you’ve never seen play before. My main overreaction that will be relevant to this season? Nolan Hickman seems like a dude.

The four-star guard from Seattle who signed with GU after de-committing from Kentucky just has an I’m supposed to be here calm confidence. He won the 3-point contest, showcasing a skill that the Zags will really need more of considering the departure of Corey Kispert. In the scrimmage he just didn’t seem rushed in a way that many freshman guards can struggle with at at times.

Coming into Kraziness, I wasn’t sure if Hickman would be a contributor this season because of the team’s depth. After Saturday, I’m more than comfortable with him getting plenty of run in a backup point guard role.

It should also be noted that fellow frosh Sallis took home the dunk contest title in the finals against another new face in Bolton. The Nebraskan newbie won with a rim-rattling between the legs gem.

On Saturday it was also announced that sophomore guard Dominick Harris is out indefinitely with a foot injury that will require surgery (if it's very bad, he might take a medical redshirt year). It’s certainly a blow for the Zags, but the Zags shouldn’t miss a beat considering the backcourt depth that was on display during Kraziness. 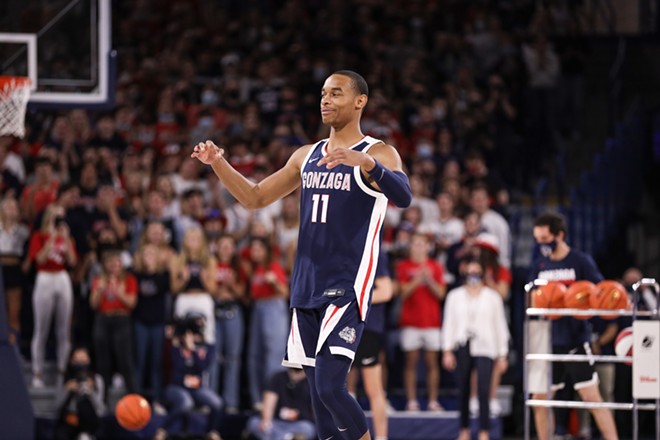 Some guys just athletically pop the moment you see them. In part, it’s my brain still wrapping around the fact that Gonzaga can land guys with elite physical skills after years of Adam Morrison and Kevin Pangos-type players who succeed in spite of their measurables.

I vividly remember the first time I saw Rui Hachimura warming up on the court before games his freshman year (when he basically didn’t play) and immediately being like, “Oh, this guy is going to be an NBA player.” The same thing held when I was watching Brandon Clarke highlights after he’d committed to transfer to the Zags.

While he’s the fourth-ranked freshman in this year’s incoming recruiting class behind Holmgren, Sallis, and Hickman, Kaden Perry’s athleticism is eye-opening. Warming up for the dunk contest, the 6-foot-9-inch center just soared through the air with an ease and grace that is hard to properly quantify unless you see it in person. The hops were clearly on a level beyond even eventual dunk contest winner Sallis (who NBADraft.net currently projects as a top 5 pick in next year’s draft).

I don’t think Perry will make a big impact on this Gonzaga season, as the frontcourt is crowded and his skills during the scrimmage still seemed very raw. He's certainly the most likely non-injured candidate to redshirt. But file his name away for future potential, and don’t be surprised if he’s throwing down a few SportsCenter Top 10 dunks during garbage time of some Zags games this year. 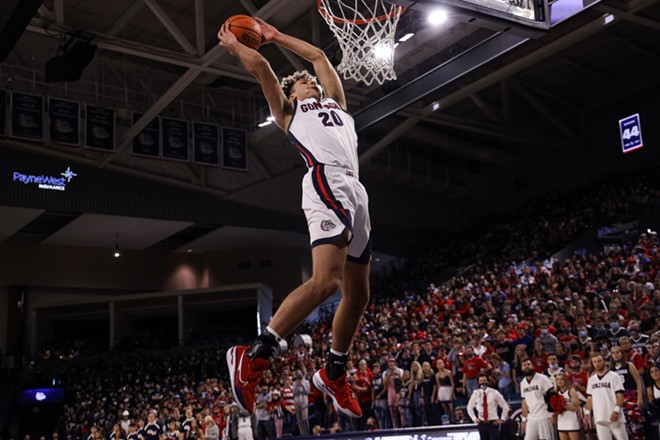 Gonzaga Athletics photo
Kaden Perry might not make a big impact this season, but the kid can jump.

5. A FEW THOUGHTS ON FEW

On Saturday morning, not long before Gonzaga would kick off Kraziness, the university announced that head coach Mark Few would not be appearing at that day’s event and would be suspended for two exhibition games and the opener versus Dixie State as punishment for his DUI citation in September.

The whole situation is a complete and total joke.

As an alumnus of Gonzaga who has scores of fellow Zags who I’m in regular communication with about hoops, I don’t know anyone who doesn’t find the way the university administration handled this is anything less than totally embarrassing. What they settled on doesn’t even rise to the level of being a slap on the wrist, it’s a complete non-consequence and shunning of accountability. Rather than face the music, everyone involved in the situation took the coward’s way out.

Suspending Few for a couple exhibitions and a creampuff opener? All games that Gonzaga should win by 40-60 points? Ones that won’t have a national spotlight? Please. It’s basically just giving him an unpaid vacation. That’s like punishing a kid by saying, “You’re no longer allowed to eat all the vegetables on your plate at dinner!”

Perhaps Gonzaga higher ups would argue that it’s in line with the preseason plus one punishment handed to former point guard Josh Perkins when he was cited for a DUI in 2016. But that’s ridiculous. The head coach and face of the university should be held to a much, much higher standard.

Heck, star forward Josh Heytvelt was suspended from the team for nine months after he was charged with felony drug possession for having some hallucinogenic mushrooms in his car in 2007. We can have a whole debate about drug criminalization, but Heytvelt having some shrooms is far less dangerous to the community than someone drunk driving.

At the very least Few’s suspension should’ve stretched one more game to include the big early season matchup versus Texas which will be nationally televised on ESPN2. Having Few not there for that actually has consequences as Texas will be a top-flight team and there’d be a large spotlight on Few not being there because of his poor decision-making. Instead, the first the country will see Gonzaga, Few will be right there on the sideline like nothing happened.

At the very least, Few should’ve been at Kraziness in the Kennel. He should’ve had to actually face the basketball community he let down and apologize. Publicly own it and face the heat for your mistake, don’t just release a statement for college hoops reporters to tweet out.

[Editor's note: This post was edited after original publication]