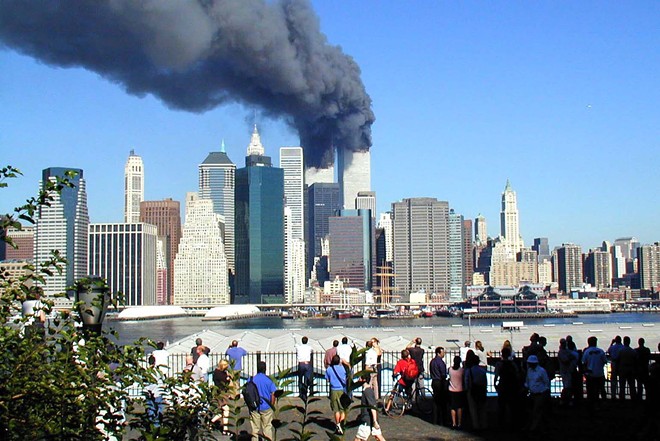 I was editor of the Statesman-Journal in Salem, Oregon. The call was from our hunting/fishing writer who had stopped by the office to pick up notepads and pens. For reasons he could never really explain, he turned on one of the newsroom TV sets, already tuned to CNN. He saw the unfolding story from New York that had begun with a 5:49 (PDT) bulletin.

My wife took the call.

“You need to get to the office. Now!”

No shower. No breakfast. No coffee. I was there in less than 10 minutes. And I did not leave for days. Some staffers rushed to the office on their own. Others came in immediately after we initiated our emergency phone tree. They did not leave either.

That magnificent group of young journalists produced two extra editions that day, distributed for free by non-newsroom staff who had volunteered to serve as street vendors.

Our work in that week following 9/11 was special, memorable and award-winning. At a 20-year-reunion of that staff a few weeks ago, we talked about that day with a mixture of pride and sadness.

But our effort was no different from the work performed by newsrooms all over the country, print and broadcast.

In retrospect, 9/11 was the last stand of so-called legacy media, the last life-changing news story owned by newspapers and broadcast television. In the media world, after 9/11, nothing could ever be the same.

Consider the media landscape at the time.

Only a few news organizations had any sort of robust internet presence. Bandwidth was limited, so even those with strong sites had no multimedia capability. Live posting during breaking news events was still uncommon, the audience incredibly small.

Newspapers had already begun their inexorable decline as the digital age emerged from infancy. But papers were still the primary source of local news and still viewed as producing the first draft of history.

On television, the three major networks — ABC, NBC and CBS — were still dominant. As for cable, CNN was the essential news option. Fox News had launched in 1996 but had yet to maximize its conservative audience.

Crude smartphones of one sort or another date to the early 1990s. Regular cellphones were able to access the internet in late 2001. But what we think of as true smartphones with meaningful photo and video capability did not become commonplace until the Apple iPhone made its debut in 2007.

If an American wanted to know what happened in New York on that terrible Tuesday, they had to watch television news or read a newspaper. That was it. What we think of as traditional legacy media owned the 9/11 story and journalists all over the country rose to the moment.

Journalists train for such days but they come only once or twice in any career. In those moments, journalists most often produce their best work. And they are proud of that, accept the accompanying honors and accolades with a somber humility. It is one of the ironies of our business that we are most proud of those moments that grow out of disaster, death, and destruction — a terrorist act in Oklahoma City or New York, a hurricane in Louisiana, a wildfire in Oregon.

But that was then. In 20 years, the media landscape has changed in ways unimaginable to the journalists of 9/11. We will never own those biggest life-changing stories again.

Social media delivers the news now. In 2021, it would be a Facebook alert rousing me from my sleep, not a fishing writer. Journalists must take the time to verify reports, confirm what they see on social media. It can take precious minutes, sometimes hours. Today, we can say with certainty that a cellphone video of that first terrorist-controlled plane would hit Facebook seconds after the plane hit.

And then the floodgates would open. As you watch the numberless retrospective 9/11 reports, imagine that every person you see in those old video reports possessed a smartphone, could stream live to social media, could bare their own hot emotions in real-time, post their own speculation.

We were all horrified by the heart-breaking recordings of 9/11 victims calling their families from the burning towers, recordings released days or weeks after the event. Now imagine hundreds of live streams from the upper floors of both towers as posters streamed to Facebook Live the rising flames, the killing smoke, their decision to jump or burn.

That terrible Tuesday, it was clear by mid-morning the attack was likely carried out by Islamic terrorists. Osama bin Laden’s name was linked to events within hours. But in our social media-driven world, speculation, misinformation and outright deception would flourish within minutes. The wackaloon conspiracy theory that the U.S. government carried out the attack to justify war in Iraq took months to develop. In today’s world, conspiracy theories would go viral in minutes.

And the hate would spread like a killing fog.

Recent, lesser disasters have shown how the social media tsunami can warp public perception of events, have shown how difficult it is for mainstream media to catch up to the misinformation with credible fact checks.

The biggest news organizations have small armies of journalists whose primary job is to sort the social media feeds in real-time so as to glean useful, factual information from the false and the harmful. It is, ultimately, a losing effort as the current pandemic has demonstrated.

Finally, consider the fracturing of broadcast news, how a 9/11 event might be reported differently by Fox, CNN or MSNBC. And the proliferation of agenda-driven digital-only information sites — think Breitbart or Newsmax — would provide coverage tailored to a partisan subset.

In many ways, the role of the traditional legacy press is more important than ever. Fact-checking the vast universe of social media posts and partisan reporting is consistent with fundamental journalistic values.

But the press is no longer the first draft of history, not the second or maybe even the third.

Next time — and there will almost certainly be a next time — it will be the job of the press to produce history itself, a record for the future.

Journalists will take pride in that effort. But it will never be the pride of a young staff working for days without sleep to report a life-changing story in real-time for readers a continent away from those falling towers.

And thinking of all those young journalists coming behind my generation, that makes me very sad. ♦