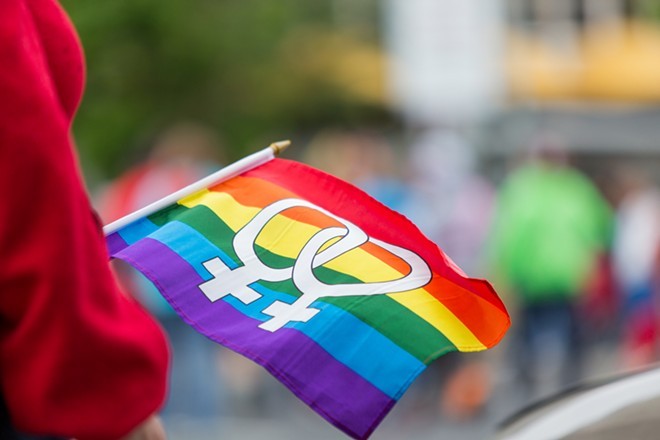 Matt Weigand
I don’t deserve this.

That’s what Mandy Manning thought when she heard the news. A text from Facebook Messenger had informed the Ferris High School teacher that she had been made a Guest of Honor at the 2018 Spokane Pride Parade and Rainbow Festival. Not only that, but she was going to be a recipient of the first ever Stonewall Impact Award from the event’s organizers, OutSpokane.

The news felt surreal to Manning. Surely there must have been someone more deserving than her, she thought. But Manning's recent small gesture of inclusivity had a big impact on the eight-member board of OutSpokane. When given the opportunity to meet with the President of the United States after being named the 2018 National Teacher of the Year, Manning took the chance to spread a message of acceptance for marginalized groups.

Wearing pins expressing her support of the LGBTQ+ community, she gave 45 letters written by refugee students living in Spokane to the president.

“So I had an opportunity to show my support of our various community members and I took the opportunity,” Manning says.

Her actions were not lost on Michael Jepson, OutSpokane's spokesperson. Jepson explained that her gesture of inclusively struck a nerve within the members of the board. They had to do something to recognize her actions.

“The fact that she took letters from her marginalized students to give to the president when receiving this award, it really resonated with several of us on the board,” Jepson says. “And we looked for something to do to recognize her. And we realized that we needed to recognize her very specifically for the Spirit of Stonewall because what she does is reflect the spirit of equality and standing for the marginalized.”

The Stonewall Impact Award will be presented to Manning at the Rainbow Festival at Riverfront Park’s Lilac Bowl at 1:15 pm on Sat, June 9. At the ceremony, Manning is set to give a 5-10 minute speech spreading her message of equality for all. The award is the first of its kind from OutSpokane and will be given out in the future whenever the nonprofit deems it necessary.

“People don’t understand how much they mean just by doing the decent thing, the right thing, especially our allies. They don’t understand how being a friendly face, a caring face, just being a decent human being gets you a lot of cred,” Jepson says.“She inspires her own award.”