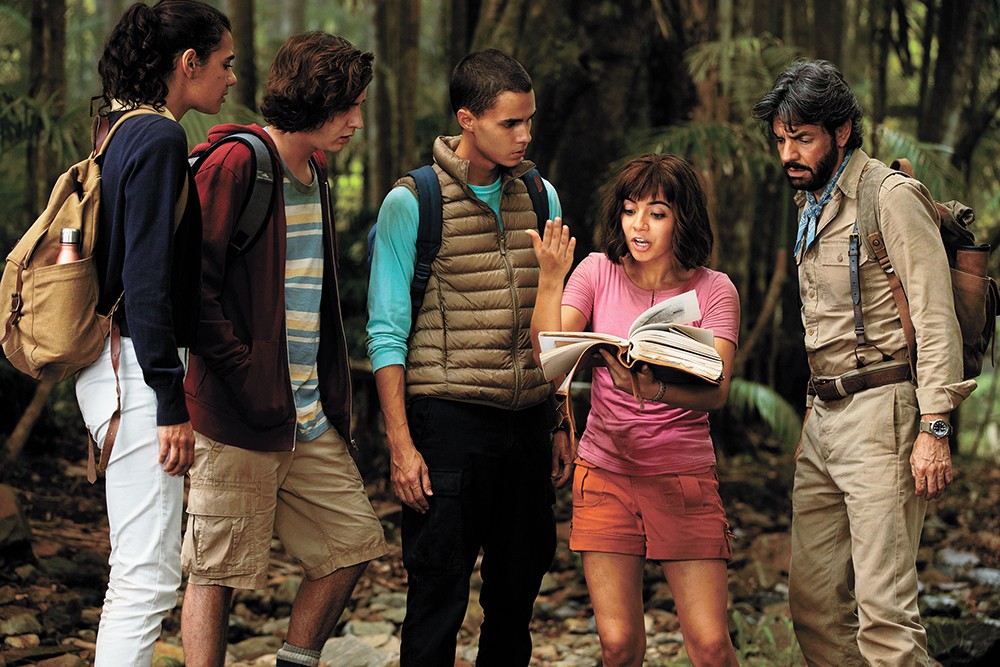 Shouting at the screen won't enliven the well-meaning but dull Dora and the Lost City of Gold.

I knew nothing about Dora and the Lost City of Gold before I went into it except that it's a live-action adaptation of a kiddie cartoon I'd never seen — because it wasn't created until I was already long into adulthood, because I have no children of my own, and because it was never one of those grownup-skewing toons that might have exerted some pull on me anyway. I loved that it was an educational show centering on a smart Latina girl, of course, and I loved that all kids seemed to love it, particularly when the b.s. conventional wisdom is that boys are not interested in stories about girls. But I was never going to be in its perceived audience.

Raiders of the Lost Ark lite for kids? That's what Lost City is, mostly, and there's nothing wrong with that. What's wrong is that it takes a solid 35 minutes to figure out what kind of movie it is going to be. Before it settles on Indiana Jones action drama, the movie indulges a long, pointless detour with the now teenaged Dora (Isabela Moner) as she is exiled from her South American jungle home — and her homeschooled lifestyle — and forced to attend public high school in Los Angeles, where she does not fit in, what with her buoyant enthusiasm for the natural world, her irrepressible cheeriness and her dedication to being herself.

There would seem to be almost no reason at all for this detour, except for Dora to collect a coterie of city-kid hangers-on, whom neither she nor the story needs. The overly convoluted plot takes her back to the jungle to rescue her explorer parents (the splendid pair of Michael Peña and Eva Longoria) from treasure-hunter kidnappers also bent on finding the fabled lost Incan city her parents are seeking. Dora — and the story — is weighted down by queen bee Sammy (Madeleine Madden) and doofus loser Randy (Nicholas Coombe), inexplicably along for the ride. As a foil for spunky Dora, her cousin Diego (Jeff Wahlberg) would have sufficed. Why not just have him come for a jungle visit before he and Dora get swept up in intrigue and adventure? I fear the presence of Sammy and Randy is merely to offer some chaste adolescent romantic potential for Dora and Diego, as if that's essential in such a tale.

But once Lost City settles into itself, it has little interest in appealing to anyone beyond its grade-school audience. Fart jokes and kiddie-style slapstick are the "highlights" of the "humor," and weird editing and lazy continuity abound, the sort of stuff that drives a grownup viewer to distraction, though kids may not notice, or care. The Indiana Jones stuff ends up feeling actively derivative; I think one vital music cue is actually lifted intact from Raiders of the Lost Ark.

I was 11 years old — pretty much smack in the range of Dora's target audience — when Raiders was first released, and it captured my imagination just fine. Lost City could have been a lot sharper and a lot smarter and still captured kiddie imaginations perfectly well. ♦