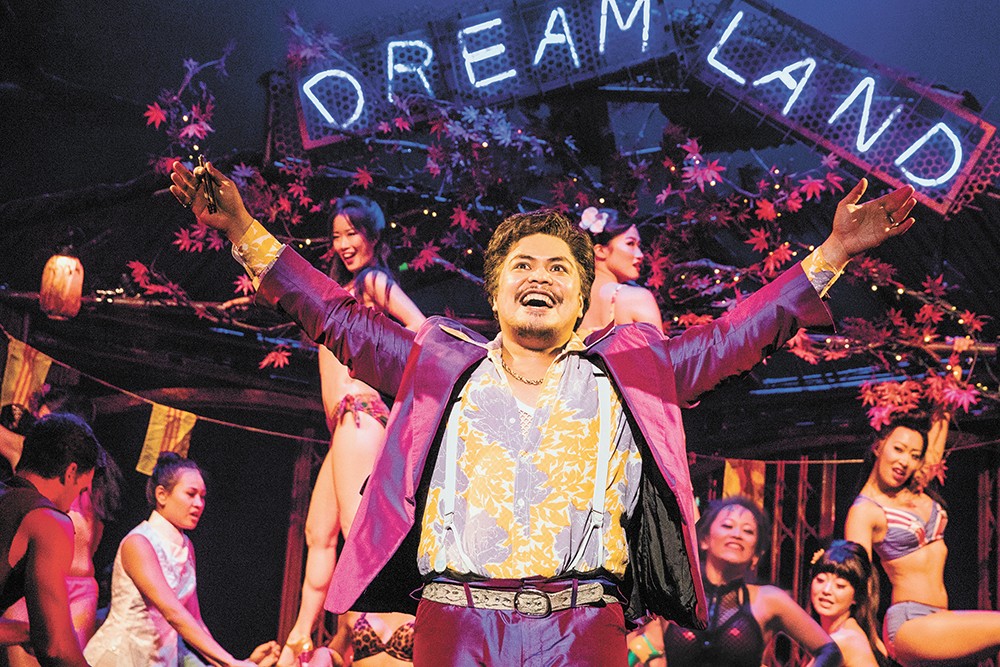 Red Concepción wasn't surprised when casting directors for the latest British and U.S. tours of Miss Saigon came to his native Philippines. His parents were both musical-theater actors, and the soundtrack of Miss Saigon was in regular rotation at his house growing up.

"In the history of Miss Saigon, there's always been Filipinos," Concepción says, noting that the original "Kim" from the 1989 London premiere and its later Broadway debut was Manila native Lea Salonga. "Every time they cast a Miss Saigon, they go to the Philippines. I went to a cattle call, and got called back to be the Engineer."

The Engineer is easily the slimiest character in the epic reworking of Puccini opera Madame Butterfly, updated to take place in Vietnam in the '70s and telling the story of a snakebit romance between a U.S. soldier and a young Vietnamese bar girl. The Engineer owns Dreamland, a bar and brothel where U.S. soldiers pay the America-obsessed Engineer for access to the young women.

When Concepción landed the part, the 33-year-old actor was excited at the chance to take his career to a new level — and take a trip to America for the first time.

"All the places on this tour, it's the first time I've ever been to them," Concepción says. "People are telling me I'm seeing more of the U.S. than some Americans [have seen]. I'm getting, like, a crash course in America, and seeing all of it."

The lessons started well before he did the tour of the United Kingdom last year — specifically when he learned just how big a role the Engineer is. Even though he grew up a theater kid, he'd never actually seen Miss Saigon before he auditioned. And once he was cast, he realized that his parents had not played all the Miss Saigon soundtrack during his childhood.

"I grew up with Miss Saigon, listening to most of the music of it," Concepción says. "My mother would skip over the Engineer's songs because they weren't child-appropriate.

"So I had no idea that the role was that big! I'd never seen it, all I had done was listen to some of the songs. That kind of came as a shock. At the first day of rehearsal, I was like, 'Oh my god, this is a big role!'"

A big role and a dream come true for the actor who has learned how to pace himself on these year-long tours so he can see as much of the cities where the show lands as possible while still being in fighting form for performances. The Engineer is a demanding role requiring a lot of singing and dancing, at the forefront of a massive cast and one of the legendarily ornate stage productions in Broadway history.

One of the challenges for the actor was finding a way to convey the fact that the Engineer is "very charming and charismatic" despite the fact he's "really a pretty horrible person." The audience needs to be drawn to the Engineer even as it's repelled by his deeds. Concepción really enjoys how much the Engineer takes from iconic American movie characters, and he's used that to inform the way he moves in character, as well as how he talks.

"The Engineer is such a complex character, so every day you can kind of find new things," Concepción says.

Sometimes, in the midst of a performance, Concepción catches himself amazed that he's part of a cast touring the world in one of theater's most renowned shows, particularly when the plot arrives at his favorite song from listening to the Miss Saigon soundtrack growing up.

"'I Still Believe,' which is sung by Kim and Ellen, that's my favorite number," Concepción says. "I kind of have to, like, stop myself from listening to it because I always get, like, moved. And I have a really active number after it. But I love it." n