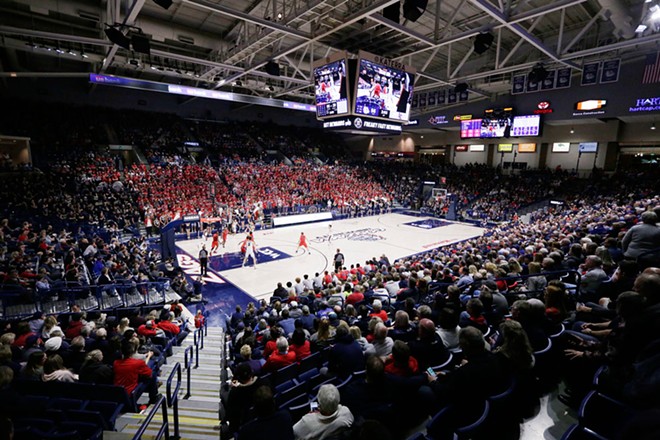 Young Kwak
The Kennel is hosting arguably its biggest game ever when North Carolina comes to Spokane Wednesday.


It’s not about the rankings or the players on the court. For this one, it’s all about the names on the jerseys. One team will be wearing Gonzaga. The other, North Carolina. They’ll play Wednesday in The Kennel in what is the biggest college basketball game Spokane’s ever hosted.

The North Carolina Tar Heels are arguably the best college basketball program of all time. They’ve won six national championships, in five different decades, with the most recent having been ripped from Gonzaga’s hands over the final two minutes of the 2017 title game. And now, they’re coming to play the Zags again.

Tillie is the only remaining player from that 2017 team which fell 71-65 to North Carolina in the national championship. Last year, as a junior, Tillie was sidelined with injury, and unable to help his team, as the Tar Heels once again defeated the Zags on the road in Carolina. For Tillie, now a senior and still battling through injuries, this game is a bit more personal than most.

“It’s a little revenge, deep inside me,” Tillie said. “It was a tough one three years ago so I’m excited to play against them and try to win.”

That attitude is part of the reason this game is going to be so special, even if it has lost some luster over recent weeks.

The Tar Heels had made 104 consecutive appearances in the AP Top 25. On Monday morning, that streak came to an end. After consecutive losses to Ohio State, Virginia and Wofford, the Tar Heels are on the outside of the AP poll for the first time since February 23, 2014.

Who they put out there is another reason why the game isn’t quite what fans hoped it would be entering the season.

Star point guard Cole Anthony, a freshman projected to go at or near the top of the 2020 NBA Draft, did not play in the last game against Wofford. He’s out indefinitely with a knee injury. Which means a Carolina team that has struggled all season suddenly finds itself without its leader in scoring (19.1 points per game) and assists (3.4 per game). They’re also without sophomore forward Leaky Black who is dealing with a foot injury.

“They’re kind of a wounded animal and their backs are against the wall,” Kispert said. “So, we’re going to expect nothing but their greatest level of intensity and fight and effort coming over here because this would be a big win to turn their season around.”

Thankfully, perhaps, Gonzaga is ranked No. 2 in the current polls instead of in the cursed top spot.

Then again, North Carolina was ranked No. 2 when these teams first met in November of 2006. Gonzaga, unranked at the time and trying to prove it was capable of remaining relevant after the departure of Adam Morrison, took down UNC 82-74 in Madison Square Garden. It might not have saved the season — Gonzaga was undefeated at the time — but it saved the program’s national reputation. North Carolina needs a win to do the same.

Would it have been better if both teams were ranked in the Top 10, as has become the norm over recent seasons? Of course. But those little numbers next to the names don’t mean much in this one. North Carolina is desperate, and Gonzaga would love nothing more than to take down the program that has had the upper hand in big moments of late.

“That’s why I came here,” Kispert said. “As a little kid I would wake up on Saturday mornings or during weekdays and have games to look forward to. Teams that don’t normally play each other, traveling across the country and playing these big-time, prime-time games. I’m glad I’m a part of it now.”

Spokane should be glad, too, because the emotion, pedigree and familiarity of these players and these programs is more than enough to outweigh the polls and provide us with a truly special college basketball environment.