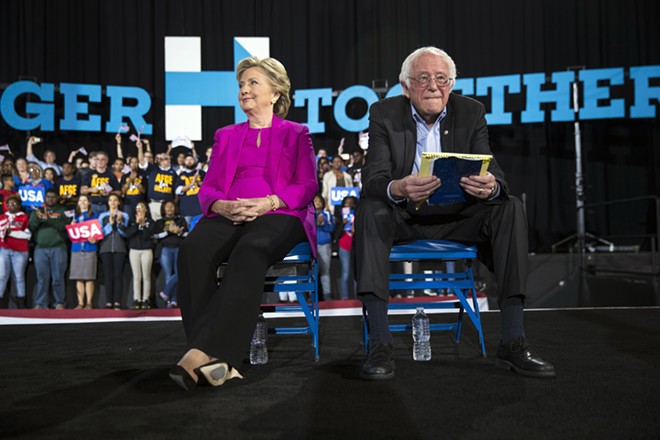 Doug Mills/The New York Times
Hillary Clinton, then the Democratic presidential nominee, with Sen. Bernie Sanders (I-Vt.), her former rival for the nomination, at a "get out the vote" rally in Raleigh, N.C., on Nov. 3, 2016. Clinton, who battled with Sanders for months in a Democratic primary that sometimes turned contentious, ripped into her former campaign rival in a new docuseries and declined to say if she would endorse and campaign for Sanders if he were to win the presidential nomination this time around.
By Matt Stevens
The New York Times Company

Hillary Clinton, who battled with Sen. Bernie Sanders of Vermont for months in a 2016 Democratic primary that sometimes turned contentious, ripped into her former campaign rival in a new documentary series and declined to say if she would endorse and campaign for him if he were to win the presidential nomination this time around.

“He was in Congress for years. He had one senator support him,” she said in a forthcoming four-part series, set to have its premiere at Sundance and air on Hulu beginning March 6. “Nobody likes him, nobody wants to work with him, he got nothing done. He was a career politician. It’s all just baloney and I feel so bad that people got sucked into it.”

Asked in an interview with The Hollywood Reporter, published on Tuesday, if that assessment still held, she said, “Yes, it does.”

And in response to a question about whether she would endorse and campaign for Sanders if he were to get the nomination, she said: “I’m not going to go there yet. We’re still in a very vigorous primary season.”

The remarks, which Clinton made this month, suggest the wounds created four years ago remain fresh, with less than two weeks to go before the Iowa caucuses and as many Democrats are harboring renewed concerns about party unity.

Since having a heart attack this fall, Sanders has gained high-profile endorsements, shown increased strength in the polls and finds himself locked in a tight four-way race to win Iowa.

But this month, a virtual nonaggression pact between Sanders and Sen. Elizabeth Warren of Massachusetts, the other leading progressive in the Democratic race, broke down, in part over a disagreement about whether Sanders told Warren that he did not believe a woman could be elected president. In recent days, both candidates have sought to de-escalate the tension, but the feud has been disconcerting to liberal activists and some of their supporters.

Asked to weigh in on the Warren-Sanders dispute in the Hollywood Reporter interview, Clinton called it “part of a pattern,” noting that Sanders had criticized her as being “unqualified” during the 2016 primary.