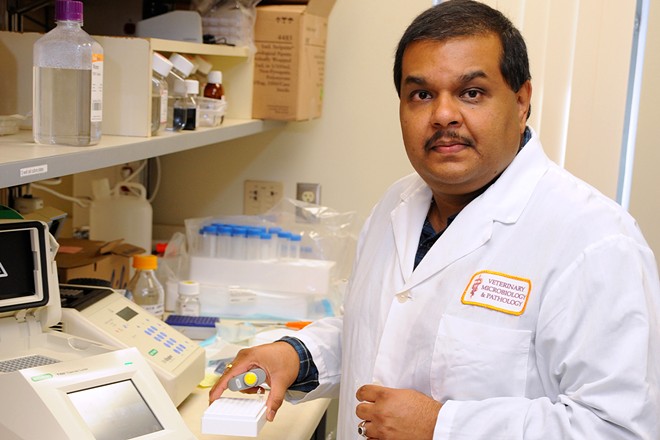 Washington State University photo
A discovery by Santanu Bose, a viral infection researcher in WSU's Department of Veterinary Microbiology and Pathology, could help treat sick COVID-19 patients
In some of the most serious COVID-19 cases, it's not the virus that kills. It's the patient's own body.


When the novel coronavirus invades your lungs, your body kicks into hyperdrive, triggering an inflammatory response. It's a natural function of your immune system, but for some people, it gets out of control. It causes tissue damage, pneumonia and, in many COVID-19 patients, death.

Santanu Bose, a viral infection researcher at Washington State University, may have found a solution. He's been studying what causes this inflammatory response for years, and his technology patented in 2018 has recently been licensed to a Canadian biotech company hoping to develop it into a treatment for COVID-19 patients.

In 2014, Bose discovered that a protein called A9 is produced as soon as a virus attacks host cells. Bose was researching lung disease severity from the influenza A virus, but researchers would later find that the A9 protein is produced with other respiratory viruses as well, including the novel coronavirus.

This A9 protein, he found, plays a key role in setting off what's called a "cytokine storm," which doctors have found is a common occurrence in severe COVID-19 cases during the pandemic. The body releases cytokines, proteins used to ward off infections, and these cytokines attack the body's own cells and tissues in a misguided attempt to fight off the virus. That causes severe pneumonia that can be deadly.

Bose equates it to bringing a nuclear bomb to a gunfight.

"You could have just used a handgun to kill it, but instead of using a handgun, your body says, 'I am going to use a nuclear bomb to kill it.' It's not only killing the virus, it's also killing yourself," Bose says. "What we're trying to do is stop that."

And he may have found a solution: A9 antibodies. The antibodies capture the A9 proteins before they can interact with uninfected cells and turn on the molecule signaling that launches a cytokine storm.

Bose tested the idea on mice infected with influenza. Without the antibody, most of the mice would die within eight days. But with it, he says, 90 percent were still living after 20 days.

It's important to note that this antibody doesn't destroy the immune system response, but only suppresses it. And it wouldn't only be a treatment for COVID-19, but any infection that may cause the body to overreact in the same way, Bose says.

Randy Cron, an expert on cytokine storms at the University of Alabama, says it "makes sense" to block the A9 protein to prevent a cytokine storm, but notes that it has not been tested in humans yet.

"There are many therapies that have been well studied and shown effective in treating other cytokine storm syndromes, and most of these are in clinical trials treating COVID-19 patients," Cron tells the Inlander.

He adds that there are studies being published reporting decreased mortality with agents that block pro-inflammatory cytokines.

"We await the randomized trials but these will very likely be shown effective more definitively very soon," Cron says.

Bose, however, notes that his technology could be used as a treatment for other complications caused by COVID-19 infections, like the formation of blood clots. The A9 antibody, unlike some other treatments in the works, can reduce those blood clots. And since the A9 technology could theoretically treat any respiratory virus, it could be useful in winter months when both the flu and COVID-19 are spreading.


Still, there are significant hurdles to get past: It's possible that the study with mice won't translate to humans, and there are still questions as to how this coronavirus will behave.

A treatment with Bose's technology is likely at least a year away. It wasn't until last week that Bose's research was licensed to a company, InflammatoRx, for further preclinical development, before human trials with COVID-19 patients can be conducted. In a statement, InflammatoRx CEO Caroline Fortier says the plan is to "initiate toxicology studies before the end of the year on the humanized anti-A9 antibody."

Yet, six years ago, Bose was thinking of a possible pandemic when he published the research, writing, "there is a constant threat from naturally evolving [influenza] strains in avian and animal reservoirs that can lead to an epidemic or pandemic."


So why didn't more people pay attention then?

"People never believe that there will be a pandemic," Bose says. "At least now, we can be more prepared for pandemics in the future."
© 2022 Inlander