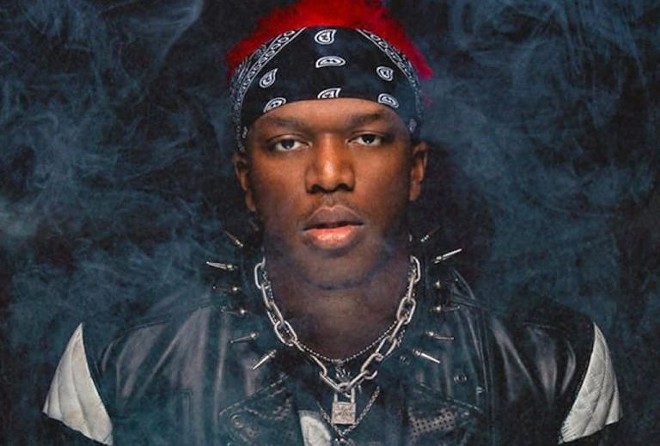 London rapper KSI is turning a start in satirical songs and YouTube celebrity into a serious music career.
London rapper KSI’s debut solo album, Dissimulation, is as diverse as his own career. KSI, or Olajide “JJ” Olatunji, started out making satirical parody songs on YouTube and recording FIFA gameplay for his fans. He gained a massive following with millions of subscribers before making a jump into the boxing world, fighting and winning against influencer Logan Paul at the Staples Center in Los Angeles. The modern-day renaissance man is showing no signs of stopping with his first album drop, featuring hip-hop titans such as Rick Ross, Offset, Jeremih, Smokepurpp and more.

Dissimulation is an album that flexes KSI’s range as a musical artist new on the scene. There are autotune bangers such as “What You Been On” and “Bad Lil Vibe,” but there’s fast-paced flow and rhyme scheme on other songs like “Poppin” and “Undefeated.” There’s even an Afrobeat-like club jam in “Houdini.” Whatever style of hip-hop one prefers, it seems like there’s something for everyone here. Even better, the big artist names help flesh out each song in their respective styles.

It’s worth mentioning how far KSI has come in the music department. When he first started to make a serious divergence toward music, his songs back in 2015 such as “Lamborghini” seemed to be a bit shallow in lyrics, only really serving as hype tracks that shouldn’t be analyzed too deeply. This isn’t necessarily a bad thing, and that style is kept alive on new tracks like “Poppin,” but it seemed like he couldn’t do anything beyond that. With Dissimulation, however, here is proof that KSI has grown as an artist, adding much more depth to his lyrics as well as expertise in how he executes the different rap styles. His flow and cadence are much better, and he’s meshing nicely with all of the different artists that are featured.

KSI’s music used to be a one-listen deal, but now he’s making music that you’ll come back to often.