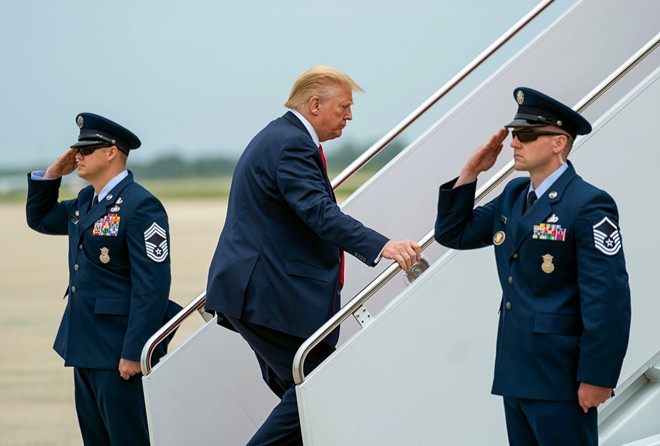 Doug Mills/The New York Times
President Donald Trump boards Air Force One at Joint Base Andrews in Maryland, for a day trip to Michigan, on Thursday, May 21, 2020.

By Peter Baker and Luke Broadwater

President Donald Trump poses a “danger for the republic” and would be an even greater threat if he wins a second term this fall because he would be unconstrained by future electoral considerations, John R. Bolton, his former national security adviser, said in an interview aired Sunday night.

In one of the most scathing public assessments of a sitting president by such a high-ranking former aide in modern times, Bolton depicted Trump as an “erratic and impulsive” leader who cares only about his own needs, does not fully understand democracy or the Constitution, is played “like a fiddle” by Russia and is not “fit for office.”
click to enlarge

“The concern I have, speaking as a conservative Republican, is that once the election is over, if the president wins, the political constraint is gone,” Bolton told Martha Raddatz of ABC News in his first television interview publicizing his memoir of 17 months as Trump’s top security adviser. “And because he has no philosophical grounding, there’s no telling what will happen in a second term.”

Bolton’s book, “The Room Where It Happened,” has become the talk of Washington even before its scheduled publication on Tuesday. The Trump administration went to court to try to block its publication, only to be rejected by a federal judge, and the president has been railing about what he considers Bolton’s betrayal. But the beginning of the book tour means that Trump will be confronted with the portrait laid out in the volume for days or weeks to come.

Bolton, a veteran of three previous Republican administrations, says in the book that the House should have investigated Trump for impeachment not just for his Ukraine scheme but for his willingness to intervene in criminal investigations on behalf of dictators and otherwise seeking foreign help for his reelection campaign.

In the interview with ABC, Bolton said rather than being deterred by the impeachment trial, Trump became emboldened by his acquittal by the Senate almost entirely along party lines. “He didn’t learn lessons from it, other than that he could get away with it, which leaves only the last guardrail — is the election this November,” Bolton said.