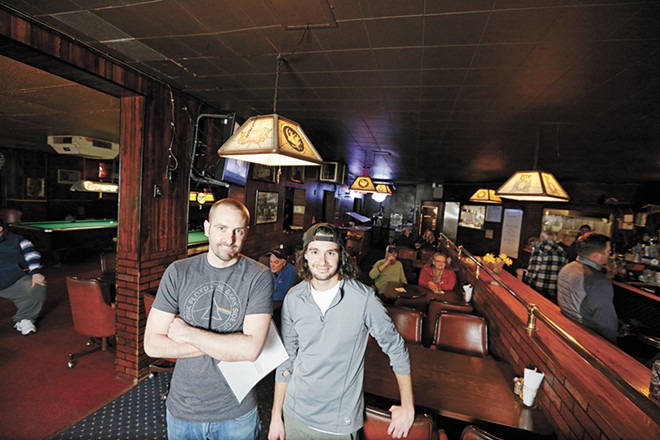 From the outside, the 8,000-square-foot blueish-gray Maxwell House is daunting.

Step inside, though, and it's not hard to understand why the restaurant/bar holds one of Spokane's oldest liquor licenses and has been a favorite West Central haunt for decades.

Open the front door and you're immediately greeted by a long wooden bar and what new co-owner Alex Springer calls "the gauntlet" — a smattering of small tables and bar stools regulars have to dodge to buy each other pitchers during Friday night happy hour. At least, that's the case in non-COVID times; the gauntlet's been quieter since March as bellying up to a bar isn't allowed under current restrictions.

Immediately left of the front door are larger tables where grandparents sit with their kids (and their kids' kids) to dine on the popular broasted chicken and burgers. Keep moving through the restaurant space and there's another room full of video games and more tables, yet another room that serves large groups. Still farther, you find a door opening to a massive backyard and full sand volleyball court.

Yes, the place is huge, something that's helped Maxwell House keep a pretty steady business going since Phase 2 started and they were able to reopen at half-capacity. And that's not even taking into account nine apartments upstairs.

Springer and fellow owner Ethan Higa are focused on leading a transformation of the restaurant and bar, including eventually making the exterior a more welcoming reflection of the good vibes they've found inside since taking over in early January. The duo wants to maintain some of the place's charm that led former owners Richard and Kay Culnane to successfully operate for more than 50 years, but also, Springer says, "slowly bring it into the 21st century."

Springer is a former manager of Downriver Grill, and Higa came over from the Wave Island Sports Grill & Sushi Bar; they're joined in the new Maxwell House ownership group by Arman Mohsenian, William Page and former Gonzaga basketball player Casey Calvary. Springer and Higa had been looking to open a little bar together and maybe do some catering when they heard the Culnanes were going to sell Maxwell House. That was about 18 months ago, and now they find themselves working long hours, updating menus and getting a friendly earful from regulars about what they may or may not change.

"We definitely bought ourselves a Cheers bar," Springer says, comparing Maxwell House to that old TV sitcom spot "where everybody knows your name."

"I love that people have accepted us. They've been very welcoming, and they all have things to say. You know, 'What I would do' or 'Don't change this.' We're taking it in stride and trying to be very accommodating and respectful."

The duo did a deep clean for a couple days after taking over, then reopened basically as the Maxwell House the regulars know and love. But they've introduced some changes. Instead of just the chatter of customers providing the soundtrack to a night at the Maxwell House, music now plays overhead. The east-facing windows were painted black years ago, but they scraped them clean to let the sunshine in (Calvary's height came in handy on that project). A menu of deep-fried favorites, steaks ($17) and that beloved chicken — Springer guesses they sold 300 orders of broasted chicken ($14) their first month in charge — has grown to include salads ($3-$11) and fresh hummus ($7). Thanks to the pandemic, they've done more takeout business than they were expecting, but that chicken works great for curbside pickup, Springer says.

Both Springer and Higa say they've been pleasantly surprised by the multigenerational customer base that loves the Maxwell House, and see the place serving a community they believe is growing northward from Kendall Yards.

"My favorite story I keep hearing is, 'I used to come here as a kid. Well, kind of. My parents used to leave me in the car while they came in here to have beers,'" Higa says with a laugh.

Another subtle change that's planned is keeping Maxwell House open longer hours to capture some of the late-night crowd. They were well on their way to establishing themselves as a service-industry late-night spot when Gov. Jay Inslee ordered alcohol sales to stop at 10 pm. They'll be developing a late-night menu, too, when things get back to normal.

"We thought we'd really have to work at it to get that late-night crowd," Higa said before the pandemic hit. "Nope, they've just been here. Like, 'OK, I guess we're busy late night!'"

Busy is a key word for both Springer and Higa. Springer figures they worked more than 50 straight days when they took over before taking a half-day off. Even though they're taking it slow when it comes to changes, there's a lot to do every day even before addressing long-term plans like developing the area around the volleyball court into outdoor dining and patio space.

Thankfully, both guys enjoy the hospitality business. They'd like Maxwell House to be the first of several establishments they open, even though it could take five or 10 years to get their vision for their new spot into place.

"I enjoy working with people. I enjoy being on my feet," Springer says. "I'm not a person who can sit in a cubicle for eight hours a day, it just drives me crazy."

"The thing I like about restaurants is there's something different every day," Higa adds. "And for the most part, we make people happy. And that's what makes me happy." ♦