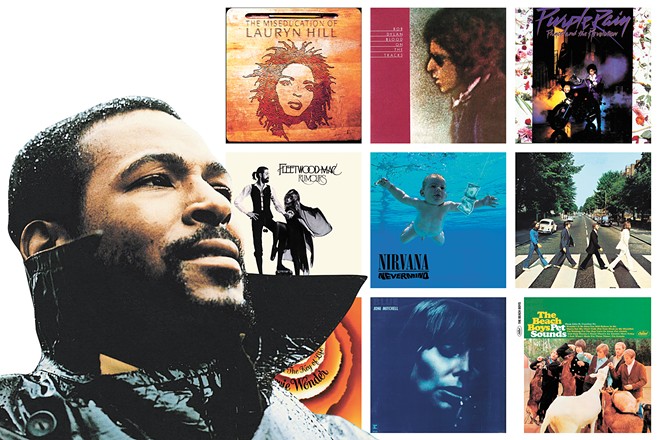 I was a freshman in high school when Rolling Stone released a special issue exhaustively ranking the supposed 500 greatest albums of all time, and as a budding music nerd, I treated it like a textbook. At the time, it seemed like the ne plus ultra of rock supremacy: The definitive music publication definitively enumerating which records were most definitive. I pored over it and memorized its contents, and it pointed me in the direction of all-time favorites like The Velvet Underground & Nico, Exile on Main Street and Blonde on Blonde.

The magazine updated the list in 2012, though most of the new additions were to the back half of the list, and the top 100 remained mostly intact. But last week, the magazine decided to rewrite its 500-album list from the ground up, and the 2020 version looks unrecognizable from its first two iterations.

Just look at the top 10. It was originally dominated by the Beatles, who had four records in the upper echelons, including Sgt. Pepper's Lonely Hearts Club Band in the very top spot. Now the Fab Four only has one title in the top 10 (that would be Abbey Road), and Sgt. Pepper's has been knocked from its No. 1 perch all the way down to No. 24. The new champ: Marvin Gaye's Motown masterpiece What's Going On, previously ranked at No. 9. It's one of only two albums from the original top 10 that still remain; the other is the Beach Boys' tour de force Pet Sounds.

Considering Sgt. Pepper's long-held reputation as the Citizen Kane of rock records, this is a big deal. And as a list lover and devotee of the original Rolling Stone feature, I find this kind of development exciting. So often when a work of art is declared the greatest and most important of its medium, it remains ascendant forever and ever, so that the notion of it ever being usurped becomes tantamount to heresy. But why shouldn't things, especially things as arbitrary as music magazine lists, get shaken up a bit? Popular tastes shift, listening habits evolve, and artists are always in the process of being rediscovered and reassessed. A best-of list should reflect that.

Of course, people are mad. So many of the negative comments I've seen on Facebook take issue with the inclusion of 1) albums released within the last 15 years, and 2) so many contemporary pop and hip-hop artists. I can't say I'm surprised — there are still fuddy-duddies who protest whenever a groundbreaking rapper gets inducted into the Rock and Roll Hall of Fame — but anyone who would deny the seismic cultural impact of, say, Kendrick Lamar or Kanye West (or, for that matter, Taylor Swift, who has two albums in the top 500) simply isn't paying attention.

The argument that a piece of art can only be considered an all-timer if it's decades old is starting to lose its merits. Take Lauryn Hill's 1998 magnum opus The Miseducation of Lauryn Hill, which seems to be raising eyebrows for its leap from No. 314 all the way to No. 10 on the new list. That might seem high, but Miseducation is one of the most beloved and influential records of the last 25 years, its heartfelt lyrics and genre-busting production inspiring countless R&B and hip-hop artists. Its new spot isn't unearned.

I have my own issues with the list. It features too many anthologies, greatest hits collections and box sets, which I think is designed to be more inclusive of more singles-oriented genres. It's also odd that ubiquitous, era-defining records like Pink Floyd's The Dark Side of the Moon and Led Zeppelin's IV didn't crack the top 50. And like the previous lists, this one is extremely mainstream in its tastes, and music made outside the U.S. and Europe is mostly ignored.

But this is exactly the kind of debate that lists are supposed to spark. And it's not like the voting body is deliberately erasing important works of art; those artists simply didn't get the votes. And that's precisely what's so fascinating to me: Why didn't they get the votes? Is it possible that an album like The Dark Side of the Moon has so completely ensconced itself within our cultural DNA that it doesn't sound as radical as it once did? Did voters opt to pick other, less regularly canonized albums they thought might be overlooked?

Maybe, and there's something to be said for Rolling Stone's deliberate diversification of the new voting body. Consider that a voter raised on Stevie Wonder is going to vote differently than a voter raised on Paul Simon. That sort of nostalgia certainly weighs heavily in which albums one would consider the "greatest," because a millennial voter might get the warm and fuzzies over a Missy Elliott album rather than a Fleetwood Mac album. The new top 100 has the likes of Amy Winehouse, Beyonce, Liz Phair, Drake and Erykah Badu rubbing elbows with the Clash, the Stones and Joni Mitchell, and why not?

There's been lots of talk about who gets to decide what's in the canon, anyway. The gatekeepers of taste and importance within the rock realm — something Rolling Stone helped popularize in the first place — have long been boomer-aged White dudes, and their tastes often reflect their own demographic. That's starting to change, and this list, as wildly imperfect as it is, serves the same function of its predecessors: It's as good a starting place as any for the burgeoning music critic, who might stumble across it, become obsessed with it, and use it as a gateway to more radical sounds. ♦