It seems like an eternity ago, but one of the first signs that the coronavirus pandemic was getting serious came from Hollywood.

In March, MGM announced that their new James Bond adventure, No Time to Die, was being pushed from April to November. Then the release date of Fast & Furious 9 was delayed for a whole year. Then it was A Quiet Place Part II, then Black Widow.

More delays followed. Theaters around the country closed their doors. And everyone waited.

While theaters around the country started reopening in late summer on a state-by-state basis — including in Idaho, where the Riverstone Regal Cinemas and Hayden Cinemas began welcoming customers again — Washington screens remained dark.

Those restrictions were only loosened in October, finally allowing movie theaters to reopen with limited capacities, and several Spokane theaters jumped at the chance to kick their projectors back on. One of them is the Magic Lantern Theater, an off-and-on staple of downtown Spokane that specializes in indie and foreign films, although the road to reopening has been a bit challenging.

In the months that the theater has been dark, Magic Lantern manager Joe Sheehan says he and his three-person crew have given the screening rooms a deep clean, cleared out storage rooms and disposed of old equipment. The indie theater has just two auditoriums, one with 100 seats and another with 35, and the smaller of the two will now be made available for private parties: Groups of up to eight people can rent it and screen the film of their choice, for $99.

"People can bring in their own DVD or BluRay, and we'll screen that for them," Sheehan says. "Down the road, we'll be able to offer new movies when we can get our hands on some stuff."

Sheehan is currently working out issues with the digital projector in the larger auditorium, so films aren't being screened for the ticket-buying public right now. But once that theater is back in operation, it will have a capacity of 25 people, and Sheehan says the staff will be placing black fabric over the remaining seats to encourage social distancing. Customers will also be encouraged not to loiter in the lobby, where 6-foot distance markers will be placed on the floor, but the theater will still be selling concessions, as well as beer and wine.

"We're going to adapt," Sheehan says. "As we go, as we learn more, we'll make adjustments on the fly and figure out what works and what doesn't. I don't think going to the movies is going away. But the whole structure of how they're distributed and how theaters operate is completely blown up right now." 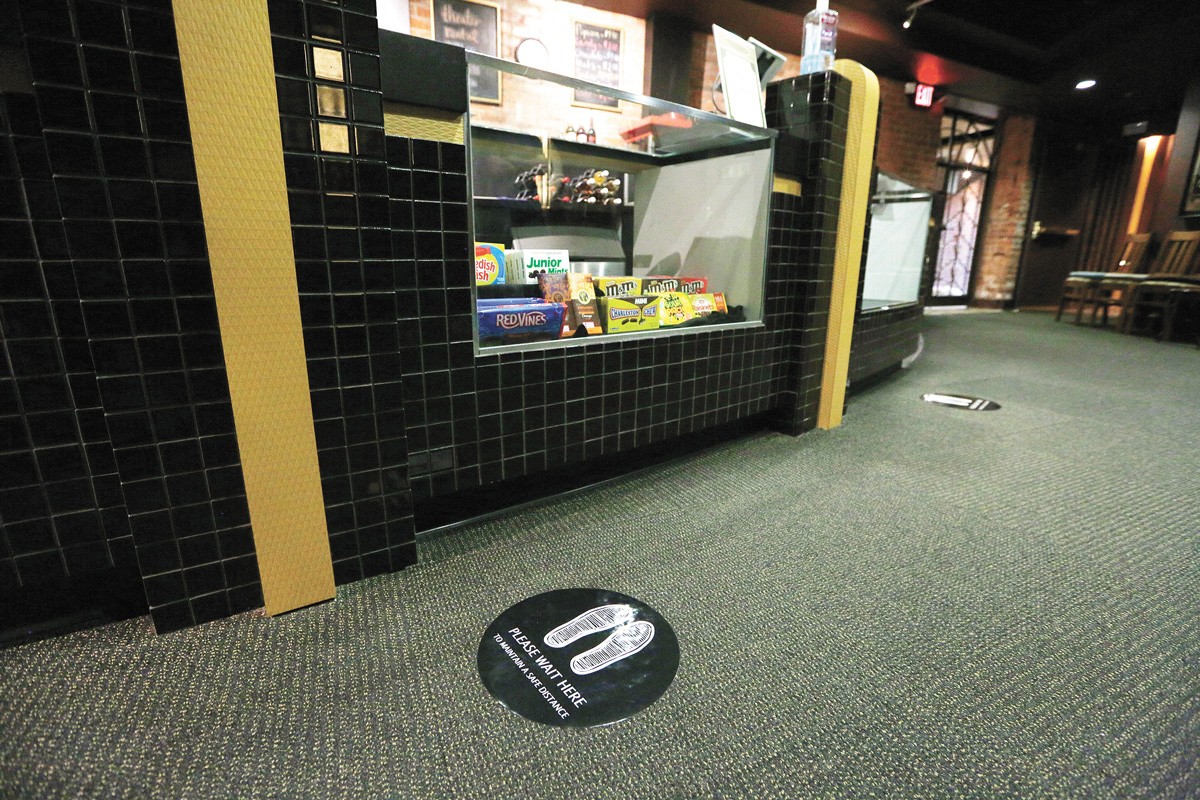 The standard process of major movie distribution has been immutable for years now: A film hits first-run theaters, then second-run and discount theaters, then makes its way to video-on-demand services and home video. A few new titles, including the long-delayed X-Men offshoot The New Mutants and Christopher Nolan's mindbender Tenet, have been released exclusively in theaters this summer, but most of the year's big properties are either indefinitely delayed or have been released directly to streaming platforms in the last few months.

It's that latter development that has signaled the most radical shift in the release model, and it has some theater owners understandably wary. The Garland Theater, the historic second-run cinema that first opened in 1945, has opted not to reopen, citing not only a lack of new titles but the resurging number of COVID-19 cases in Spokane.

"We hear that people don't want to risk going to the movies yet," the theater wrote on its Facebook page last week, noting that they don't want to spend money to reopen only for a worsening pandemic to shut them down again.

"Since Hollywood is not creating or releasing new films, we don't have any new movies to choose from," the message reads.

Those concerns aren't unfounded. Regal Cinemas, one of the country's largest theater chains, had a difficult time keeping customers coming through their doors, and ended up closing all of its operating locations in October (including the one in Coeur d'Alene) for an undetermined amount of time.

But that doesn't mean there's not an audience for theatrical films right now. The 20-screen AMC location in River Park Square has reopened, showing a mix of titles both new and old: Last weekend's showings included the new Kevin Costner-Diane Lane drama Let Him Go alongside older fare like The Hunt for Red October and Toy Story. (They also announced private rentals ranging from $99 to $149 to watch new films or old favorites.)

The Pullman-based theater chain Village Centre Cinemas has also opened its Wandermere location. The theater was selling bags of popcorn in the parking lot throughout the summer to bring in revenue, and it's finally back to showing movies again after eight months of inactivity.

The theater has 14 auditoriums, ranging from about 100 seats to nearly 300, and all of them are in operation at 25 percent capacity. Armando Escareño, the Wandermere location's general manager, says he has 33 employees back at work, many of whom are returning from pre-pandemic days. Both Village Centre and AMC have implemented similar safety protocols: Masks are required of customers and staff in all common areas, as well as in the theater unless customers are eating or drinking. Plexiglass shields have also been installed at concession counters.

Village Centre is currently showing the handful of films that have been released in the second half of 2020, including the horror film Come Play and the family comedy The War with Grandpa. Escareño says the theater has reduced concession prices and will also be screening classics like National Lampoon's Christmas Vacation at discounted ticket prices. Still, he hopes Hollywood's already sparse release schedule stays in place: Wonder Woman 1984 is still slated for a Christmas Day theatrical release, and several Oscar hopefuls should hit big screens in the coming months.

"We are hoping that that content that is slated to be open stays on," he says. "I'm actively always watching movies. I'll watch anything, but not being able to watch it on the big screen — I think [that] was the major draw."

"[Going to the movies] is such a communal experience, or it can be completely solitary," Lantern manager Sheehan says. "I like going to the movies by myself, but I also really like going with other people and then having a bite or a drink afterwards and having a discussion about it. That's why I like working here, having conversations with people that come out of the movie. I miss talking about the art and entertainment of it."

Escareño says his customers are clearly in the same boat in missing the big-screen experience, and in the two weeks that Village Centre has been open again, he's already seen a number of regulars who haven't been to the movies in months.

"When we were open this weekend, it kind of hit me," he says. "It was really exciting seeing people in my theater again. Just seeing all the old faces — even with the mask on, you can still tell it's them, bringing life back into the theater."♦