Sports fans just want something, anything, to go their way in 2020. The NCAA Tournament was canceled, the Seahawks don't have their 12th man and there won't be an Apple Cup — which might be a blessing in disguise for the Cougar fans among us. That's just to name a few of the disasters which have befallen the sports world. Now, more than ever, the sports fan you know and love needs someone, something, to tell them that they still matter. That sports still exist, even if it doesn't seem quite like it these days. 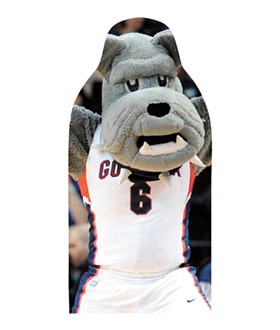 FAKE FANS
There won't be fans in the stands at Gonzaga games for the foreseeable future, but don't let that keep your loved one — or, rather, a photo of your loved one — from being present at the games. Fan cutouts, like the ones that popped up at baseball and football stadiums in the past months, are coming to The Kennel. Send in a photo of the Zag nut in your life, and they'll land a spot in the stands all season long. $70 • gozags.com

BASEBALL STICKERS
If you're not a baseball fanatic, 6-4-3 might just sound like a series of numbers, rather than the scoresheet slang for a common type of double play. 60 feet, 6 inches isn't just some arbitrary distance, it's the distance between the pitcher's mound and home plate. Curveball Keepsakes sells these and other baseball numbers on black-and-white oval stickers perfect for the baseball fan's bumper, window or water bottle. $4.95 • From Here • 808 W. Main, #251

SPEAK OUT SPORTS EDITION
Imagine a game that combines all the fun of a dentist appointment without the awful experience that is an actual dentist appointment. That's Speak Out, a multiplayer game in which players attempt to effectively communicate while their mouth is stretched wide open. The sports and games expansion is perfect for the sports buff in your life who knows enough to talk sports even if they physically can't talk. $6.99 • Uncle's Games • 404 W. Main.

SPOKANE CHIEFS KNIT HAT
Taking in some Chiefs hockey at Spokane Arena is a classic winter activity around here. Unfortunately, that won't happen this year, and maybe not at all this season, which has already been delayed until Jan. 8. That shouldn't stop the hockey lover you know from showing their Spokane pride. Pick up one of these classic winter hats in bold red, white and blue, complete with a pom on top. They'll stay warm this winter, at the rink or otherwise. $23 • Spokane Chiefs Team Store • 700 W. Mallon ♦